Artemis is a demon introduced in Devil May Cry 5. It was created from the fusion of the Artemis with Lady as its host. Nero faces it as a boss in "Mission 03: Flying Hunter".

Artemis is an angelic looking demon with scaly skin. Its body is similar to that of a mermaid, with a humanoid upper body and a piscine lower half. It has six wing-like limbs that each have a series of glowing purple lights on them. Two wings are held over its head, two are stretched out to the side and the last two cover its body. The lower half of its head resembles a woman's, but the upper half is composed of several clawed appendages that clench together to resemble a bandaged cranium.

Before Devil May Cry 3: Dante's Awakening[]

Artemis was first created as a Devil Arm by the legendary demon gunsmith Machiavelli.

Artemis is first found by Dante while climbing Temen-ni-gru. After he activates it to clear out a collapse, by overcoming the Trials of Warrior, Skill, and Wisdom, he takes it for himself.

Trish uses the Devil Arm in her and Lady's battle against the demon king Urizen, hoping to use its multi-hitting projectiles to overwhelm Urizen's defenses. Unfortunately, this tactic failed and both female devil hunters are defeated and captured.

Urizen uses the defeated Lady as a host for the Devil Arm Artemis, allowing it to grow a fully-functional body for itself, with Lady acting as its core. This new demon Artemis aids Urizen in his efforts to gather blood for the Qliphoth for a month, until Nero confronts the demon in the depths of a ruined library within the sunken portion of Red Grave City. The demon makes its presence known to Nero before their battle by flying by a long hallway of windows, its intense speed shattering all of them.

Nero battles Artemis soon after, noting that this demon is different from the rest that were besieging Red Grave, that it was silent save for its strange singing that accompanied each of its projectile laser attacks. Though Artemis attempts to overwhelm Nero with constant bombardments of lasers and strikes with its own fast-flying body, the demon is defeated and cut open by the young devil hunter, who frees Lady from its body.

Nico takes a piece of the demon after the battle, but what she uses it for is unclear.

Later on a dying V is ambushed by Malphas, who uses a spell to trap him in a pocket dimension and lock away his familiars. Inside this pocket dimension V is forced to fight several ghostly figures, dubbed 'Metaphysical Infernal Phantasms' by Nico. One of these figures is a recreation of Artemis, named Mirage Artemis, created from V's memories.

You heard of Machiavelli? He's a legend. One of the underworld's top gunsmiths.

Now would you believe it if I told you Artemis started out as a gun he made? Seems that fusing the gun with a human host created this.

Man, I wish I could have seen it in the flesh. Those energy beams it was shooting at you were graceful, right? Like a ballet of destruction. Yeah, I can see it now.

A priceless relic, one of the last remaining artifacts of Machiavelli's genius. ...Until somebody came along and smashed it the hell up.

Just...just don't talk to me for a while.

Another metaphysical infernal phantasm. Man, I love the sound of that.

This one's based on Artemis... But just my luck, the gorgeous light show of the original ain't nowhere to be seen.

Whatever it was that made this thing got no appreciation for the finer things in life!

Artemis first appeared in TEPPEN with its "The Devils Awaken" expansion. It is featured in one unit card and one action card.

In Greek mythology, Artemis was the daughter of Zeus and Leto, twin sister to Apollo and goddess of the moon and the hunt. She is also considered a mother goddess, especially in Ephesus.

The design is likely based on Seraphim due to its angelic appearance, six wings and the eyes within them. 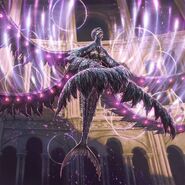