Devil May Cry Wiki
Register
Don't have an account?
Sign In
in: Devil Arms, Weapons, Devil May Cry 5,
and 2 more

Back to page
Edit

Balrog is a set of gauntlets, grieves, and shoulder pads (Blow Mode only) created with the sealed power of the king of Fire Hell.[2]

All of Balrog's components are metal and plated in such a way that they look like magma once fire starts flowing through them. The gauntlets have yellow eyes on the back of the hands that have black slit pupils. The shoulder pads have to large spikes that curve out to the sides of Dante before curving upwards. During certain attacks, the gauntlets increase in size.

The Balrog has two different modes, a Kick Mode and a Blow Mode.

Kick Mode lets Dante perform powerful kicks on enemies. Dante seems to use a style similar to capoeira, incorporating a lot of flips and cartwheel-kicks. While using Balrog, Dante can perform a breakdance windmill, kicking any enemies around him. It has a backflip-kick rising launcher and a dive kick.

Blow Mode focuses on boxing-like punching and allows Dante to execute short dodges. Balrog has a quick jabbing attack while on the ground. It also has an attack where-in Dante dashes forward and delivers a large straight that can be followed with a powerful uppercut. Dante also has a can also execute a full spin into a backfist. While in the air, it has a three hit aerial combo that ends with a powerful punch that sends enemies to the ground.

A special mechanic known as "Ignition" allows the weapon to light up on fire and deal additional fire damage to enemies. Balrog will enter the Ignition state if Dante keeps punching opponents in Blow Mode or performs a special dance in Kick mode. If the weapon is inactive for a period of time, the fire will fade away, and it will have to be ignited again. 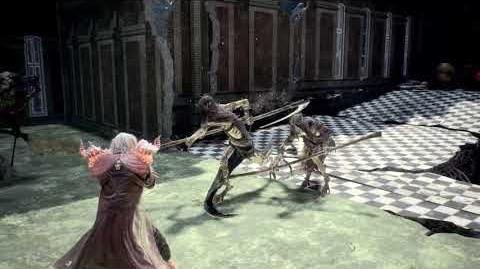