The Bangle of Time (時の腕輪, Toki no Udewa?) is an Item in Devil May Cry. It is a skeleton-motif bangle which allows Dante to stop time for nearby enemies by consuming his DT runes.[1] Phantom, Griffon, Nelo Angelo (only in Mission 17), Nightmare and Mundus are immune to its effects.

The Bangle of Time is found on a high platform in Secret Mission 12: Hidden Bangle. It is not necessary to obtain the Bangle of Time to proceed with the game. Once obtained, it is carried over into New Game+.

For it to take effect, the player must go to the item menu, select the Bangle, and choose to wear it: it is then "on" until the player goes back into the menu and unequips it.

While it is equipped, Dante trades his normal Devil Trigger abilities for its effects. Using it pauses all normal enemies and some bosses in place until the Devil Trigger gauge is depleted or the player manually deactivates it. Paused enemies do not react to anything Dante does: they will not flinch, cannot be launched or knocked down, and will not die if they take lethal damage. All damage is applied to them at once after the effect of the Bangle concludes, and the Stylish Rank will also not update until the Bangle's effect ends. As a result, the Bangle is best used when the player has a good grasp of how many hits it takes to kill an enemy at the current difficulty level, as this will avoid wasting damage by "overkilling" enemies.

Enemies paused by the Bangle also cannot change states as they normally would: for example, a Death Scissors would normally switch to its invulnerable state after 1-2 Helm Breakers, but while paused with the Bangle, the player can deplete all of its health in one go. This is a double-edged sword, however, as it also prevents some enemies such as Shadows from entering their vulnerable states, and if an enemy is paused while blocking their guard cannot be broken.

It does not pause in-game timers, but can still be useful for dealing with the Devil Trigger timers that appear in Dante Must Die mode by rendering enemies helpless. 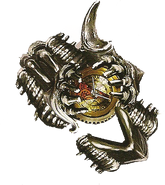 The Bracelet of Time from the Bayonetta franchise.

The Bangle of Time in TEPPEN.
Add a photo to this gallery

Retrieved from "https://devilmaycry.fandom.com/wiki/Bangle_of_Time?oldid=99899"
Community content is available under CC-BY-SA unless otherwise noted.