Todd Haberkorn (English)
Baphomets are lesser demons that appears in Devil May Cry 5.

Baphomets are goat-like demons with horns similar to an ordinary goat. They have blue green fur, a long tail, and long talons. They have ability to use ice.

Your average demon don't have the smarts to actually wield their power as magic.
This fella breaks the mold, though- he may only have ice tricks up his sleeve, but that's still enough to kill you if you don't watch your ass.
Just look at those freaky, stick-thin limbs. Physically speaking it's weak, and it knows it, too. It'll try to keep its distance and throw up a magic shield to block your shots. You'll have to get in its face, or wait for your chance to shoot past the shield.
Hey, nobody said this business was easy.

Baphomet is an ice enchanter somewhat similar to a Frost minus any melee capabilities. Left to its own devices, it will summon a shield that protects it from projectiles and Nero's Snatch and Wire Snatch, and then float around casting ice projectiles or summoning bursts of ice from the ground. They tend to try to avoid getting too close.

The shield is easily broken with melee attacks, which renders the creature extremely vulnerable as it takes it some time to re-invoke it. Using Nero's Payline or Dante's Trickster Style Air Trick is a good way to close range: in Dante's case, this can be followed up with Balrog's three-hit air combo to slam the Baphomet into the ground.

If they are knocked down it takes them a long time to get back up, allowing the player to finish them off or shift focus to another enemy as the situation demands.

In Judeo-Christian mythology, "Baphomet" is the demonic entity allegedly worshipped by the Knights Templars who later became a symbol for Satanic worships. During the Inquisition of the Templars in the 14th century, the knights were falsely accused of worshipping this figure. The famous icon of Baphomet, i.e. as a goat-headed idol, however, only emerged much later on. This icon quickly became a symbol of the occult, specifically as a representation of evil and the Devil. 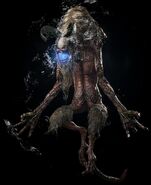