In Devil May Cry 2, Trish can use punches and kicks during Round Trip, or after planting Sparda in the ground. Compared to Sparda, her hand to hand combat has less range and power, but the moves raise Stylish Rank more. While using her hand to hand, she has a fire enhanced uppercut and a flaming dive-kick.

In Devil May Cry 4: Special Edition, it's Trish's main method of combat. All of its attacks can be charged for extra damage (although only one level high), and the moveset will change depending on whether or not Sparda has been thrown.

Note: None of Trish's hand-to-hand techniques in Devil May Cry 2 have official names. 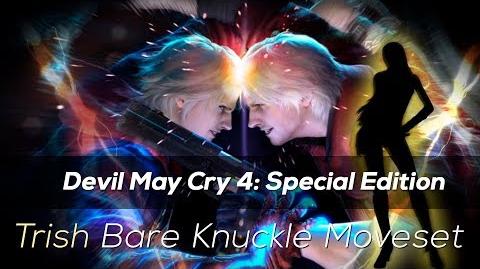 Trish Bare Knuckle Moveset
Add a photo to this gallery
Retrieved from "https://devilmaycry.fandom.com/wiki/Bare_Knuckle?oldid=110245"
Community content is available under CC-BY-SA unless otherwise noted.