Bathos and Pathos are flying enemies in DmC: Devil May Cry. To make up for their small vitality, they sometimes carry shield that must be removed first in order for them to be damaged.

Gold putti-like demons that fly around in the air. Their abdomen is an open cavity filled with fire, which they shoot explosive charges from. Their bombs can be deflected back at them, making short work of them, otherwise the bombs will explode moments after hitting the ground. The ensuing blast can also damage other demons caught in it. In later encounters with the golden Bathos, they will also employ shields. Earlier versions of their concept referred to them as "Stingers." 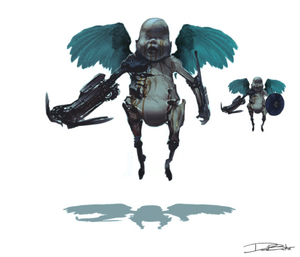 A demonic putti who specializes in long range attacks from the air using a crossbow that shoots balls of fire. They can also carry a small shield that deflects attacks, and will need to be torn from their arm before Dante can deal damage.

Retrieved from "https://devilmaycry.fandom.com/wiki/Bathos_%26_Pathos?oldid=46023"
Community content is available under CC-BY-SA unless otherwise noted.