Devil May Cry Wiki
Register
Don't have an account?
Sign In
Advertisement
in: Articles in need of translation, Weapons, Devil Arms,
and 6 more
English

Beowulf is a set of black gauntlets and greaves with a somewhat animalistic look. The gauntlets vaguely resemble a wolf's head, with fangs and mane. The greaves look like clawed legs. They also have glowing veins that have white light flowing through them.

As they are "blessed with the sacred light,"[1] all of Beowulf emits light with each punch and kick. They are capable of concentrating light into a ball and throwing it or erupting it from the user's body. It can also cover the user in light.

Library - Arms - Vergil's Arms
BEOWULF
Gauntlets with the power of light that have overwhelmingly destructive force.

Beowulf, a mighty demon, thought once to take his hatred of Sparda out on the dark knight's son. Vergil, however, defeated him so completely, that there was nothing left but these boots and gauntlets.

Imbued with the power of light, they shine in close-quarters combat where a single, fully-charged attack can unleash immeasurable power.[2]

Fighting gauntlets and boots imbued with the power of light. They pack a hell of a wallop when fighting in close quarters.

So Vergil thrashed the mighty demon Beowulf so bad, hardly anything was left of him. Still managed to make these gauntlets and boots from the scraps!

I guess Beowulf had some kind of horrible grudge against the great swordsman Sparda and thought to take it out on his bloodline? Didn't go to well for him though! Dante claims to have fought this guy too. I asked about it but all he'd given me was "Stubborn bastard. Tougher than some, though."

Beowulf focuses on close-range, but powerful hits. Beowulf generally has a narrow area of effect making it a less than ideal for crowd control. It boosts the wielder's attack and speed for close combat[4][5], and is able to charge its attacks for harder hits, and in the case of Rising Dragon, more hits. When Beowulf's attack becomes fully charged, the attacking body part will start to shake and Dante's voice will change in a rough outcry when the attack is performed. Killer Bee is a dive-kick that can adjust its angle of descent to adjust for enemy position. Swordmaster technique Volcano will knock back all enemies around Dante. Real Impact, the strongest move of all the Devil Arms, will pull any enemies in Dante's immediate vicinity into the air with him, but has a long start-up and cannot be canceled out of, leaving Dante vulnerable.

In the Special Edition, Vergil has access to Beowulf and it generally has the same properties it has when used by Dante but lacks the charge mechanic. His attacks hit harder than Dante's, removing the need for charging. Starfall is Vergil's dive-kick, and it works the same as Dante's except it does more damage. Lunar Phase is a multi-hit spin kick that can be Jump Canceled. Rising Sun is Vergil's launcher where he performs two upward roundhouse kicks. This technique cannot be canceled and aerial attacks can't be used until the attack is finished.

Beowulf in general is Vergil's most powerful weapon. It easily can be considered "overpowered". Vergil is able to charge all of its attacks up to two shines, three with full Concentration. The third charge automatically launches the attack. Just Frame release can enhance every charge for higher damage, and can be combined with Distortion for devastating amounts of damage,

In Devil Trigger, Vergil is able to spend some of his Devil Trigger gauge to power up his moves, much like Dante. Such being Lunar Phase (ground), ending with Rising Sun move and Lunar Phase (mid-air) making additional spins.

Beowulf returns as Vergil's power-based weapon. It retains all of its moves from Devil May Cry 4: Special Edition, along with the return of Rising Sun outside of Devil Trigger as a followup to Kick 13. In Sin Devil Trigger, Vergil gains a reverse roundhouse kick from Combo A, a shoulder ram from Combo B, a rising kick from Starfall, and a third uppercut for Dragon Breaker. Vergil also gains a new move called Hell on Earth, an attack similar to Sin Inferno where he raises his hand while charging up power before slamming it down in a wide explosion. Though it deals an incredible amount of damage at the center, it rapidly falls off the further away the enemy is from Vergil, making it ideal for boss fights or closed rooms. 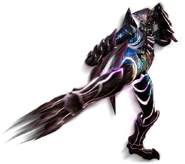 Dante uses the Beowulf in Marvel vs. Capcom 3: Fate of Two Worlds. The skills packed with it are Killer Bee, The Hammer, and Volcano, along with a new ability called Beehive (which is actually a named version of his Beowulf Combo II from the original DMC3), where Dante kicks rapidly with his greaves then heel smashes the ground and thus acts as a followup to Volcano.

The updated re-release of Marvel vs. Capcom 3 features the addition of Vergil to the roster of playable characters. He comes equipped with Beowulf, like Dante, and can use several of its attacks: Starfall, Lunar Phase, and Rising Sun.

Dante retains the use of Beowulf in Marvel vs. Capcom: Infinite with many of the same moves as before, though the gauntlets now exude a purple glow when used.