Blades and Assaults are lizard-like demons created by Mundus, the emperor of demon-kind,[1][2] to attack the Human World.[3] Blades are encountered as common enemies in Devil May Cry starting with Mission 9: New Strength, and briefly in the underwater missions of Devil May Cry 2. Their Devil May Cry 4 counterparts, the Assaults, are first encountered by Nero in Mission 8: Profession Of Faith

Assaults are the Devil May Cry 4 equivalent of the Blade. The two demons are essentially identical in appearance and behavior but Assaults are lighter in color and have decorative frills around their heads. Assault helmets and shields also appear different than those of the Blades. While the Blades' armor appears to be made of metal, the Assaults' equipment appears to be made out of an alabaster substance similar to bone.  Though being similar in powers, Assaults have their own offensive features, such as having extremely strong vocal cords.  And if enraged, their screams can generate sonic shockwaves around themselves, which rends the air and creates a small sandstorm. While doing that, their frills also raise up to indicate the demon's intimidating look. Another significantlly noticeable ability is to be able to freely move like in the air and make aerial attacks by spinning like a drill. The also can ramp up velocities in mid-air by curling and spinning up before that. In the Metis Forest, the serve as a potential host prey to Chimeras, obtaining remarkable movement abilities afterwards, such as being capable of performing more dynamic and stable air attack and increase their number up to three and  also make farther jumps.

First being combo attack: Assault swings its claws in arc and then performs an uppercut, launching in the air if hit.

Second being burrow strike: Assault digs into the ground and then moves at you (trail can be seen) and emerges with a claw strike.

Third being aerial dash: Assault jumps, starts to spin its body which enables it to move in the air and then rushes at you. If Assault is possessed by Chimera Seed, it performs this attack three times.

Fourth being claw shot: Assault stands into aiming stance and then shoots the claws from its hand at you, which have high range. Assault then suffers from the loss of its claws afterwards, which makes it vulnerable.

Fifth attack is the enrage: after taking some hits or the time period has passed, the lizard-demon lets out its full power by creating an ear-piercing screech, generating a shockwave around itself and becoming more agressive. This attack can be used by the Assault only once.

An alternate universe version of Blade appears as part of the demon rebellion against Mundus, alongside fellow elite demons Frost, Phantom, Shadow and Griffon. Though appearing human, he can take on the form of his namesake via Devil Trigger. 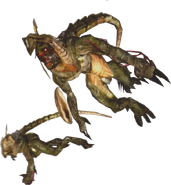 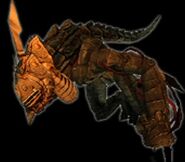 DMC2 Enemy file.
Add a photo to this gallery

Retrieved from "https://devilmaycry.fandom.com/wiki/Blade?oldid=97810"
Community content is available under CC-BY-SA unless otherwise noted.