Devil May Cry 2
Bolverk is a powerful demon who is constantly accompanied by his wolf companions, Freki and Geri.

Bolverk fights with an extendable spear and tactics involving his wolves. He is a skeletal demon warrior who is driven to seek revenge against Sparda's heir. Interestingly, Bolverk's eye sockets are unevenly sized.

Bolverk is a demon warrior who once fought against The Dark Knight Sparda[2] and was defeated by him[3] in a very difficult match, proving to be a nemesis to the Legendary Dark Knight. [4] After Dante first defeats Freki and Geri before entering the streets of Uroboros City, they returned to Bolverk, waiting atop a skyscraper. Bolverk later reappears in the underground Ruin, where he challenges Dante to a duel. Dante chases him off and continues through the sewer, eventually meeting with Lucia. Bolverk later reappears as Dante climbs Arius's tower, and this time Dante destroys him.

Bolverk is a loyal servant of the Demon God Argosax, acting as his most powerful soldier and guarding a temple dedicated to him[5]

Main articles: Dante's Mission 11 and Dante's mission 16
As a boss, Bolverk fights in a similar way to Nelo Angelo.

Freki & Geri are two all-white, wolf-like demons that serve Bolverk. They may be reincarnated figures of warriors whom Bolverk fought alongside. They first confront Dante in Mission 5, and return to assist Bolverk in his battles against Dante in Mission 11 and Mission 16.

They are larger than any normal wolf, being nearly as tall as a man. The chains they wear around their necks and bodies do not seem to hinder their attacks, as they are capable of jumping long distances and with great ferocity, knocking aside anything in their path.

Bolverk was first added to TEPPEN via its "The Force Seekers" expansion. He is featured in one purple unit card. This purple unit card is able to spawn Freki & Geri into the EX Pocket or board, depending if the player Ascends.

In Norse Mythology, Bolverk is an alias Odin once took while masquerading as a human. Traditionally, Odin only has one eye, a fact reflected by Bolverk's unevenly shaped eyes. Bolverk's usage of a spear also matches Odin's Gungnir in terms of similar weaponry. The Gungnir is known as the "Swaying One". The only difference is that Bolverk has his spear shaped like a large blade.

Freki and Geri are two wolves that acted as companions to Odin.

Bolverk's skeletal appearance may also be a reference to the Draugr, a race of intelligent undead Vikings from Norse Mythology who possessed numerous supernatural abilities (such as driving people and animals insane, shapeshifting, or increasing in size) guarded treasures they were entrusted with (and punished those who tried to steal it), and took great pleasure in killing their victims either by devouring or mutilating them with weapons. (Bolverk crumbling into ash after being killed by Dante is likely a reference to this).

With his servants, Geki and Freki. 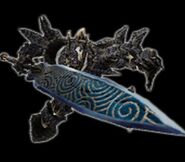 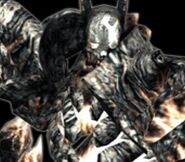 In-game file image 2.
Add a photo to this gallery

Retrieved from "https://devilmaycry.fandom.com/wiki/Bolverk?oldid=108151"
Community content is available under CC-BY-SA unless otherwise noted.