Nico creates the Buster Arm at the same time as Tomboy after Nero defeats Artemis. The device is the result of her attempting to artificially recreate the Buster ability of Nero's lost Devil Bringer.

The Buster Arm is a large claw in primarily silver and red, with glowing blue highlights. When in use, it transforms into a giant clawed mechanical hand which is projected on a glowing cable.

Nico tried to recreate Nero's lost demonic arm, resulting in a powerhouse capable of throwing enemies with devastating force. This brute strength comes at the price of reduced durability, but the chance to toss around massive demons is well worth it.

I only had one goal in mind with this beast: recreate the demonic arm that bastard stole from you. I bet ya been itching to chuck around baddies again, am I right?

Well rejoice! I did it! This arm lets you toss around demons like a boss, even slam them into the ground if you have the hankering!

...For a little while, anyway. But that's as tough as I can make this sucker, dammit! I swear!

, the same as the DLC Sweet Surrender.

The Buster Arm emulates Nero's Buster ability from the previous game, functioning in the same way: it allows a short-ranged uppercut-like grab attack which, if successful, will trigger a grapple or throw animation specific to the type of enemy it is used on. Some animations can be enhanced by further control inputs: for example, when using the Buster Arm on a Hell Caina, Nero will fire one shot from Blue Rose into the demon's head normally, but repeatedly pressing the shoot button can increase this to up to three with a Neo Buster and five with a Super Buster, with a corresponding increase in damage. It can be used on the ground or in the air. With the standard attack, the Buster Arm will be destroyed if Nero is hit during the initial swing or the subsequent animation.

As with the Buster, large or powerful enemies may need to be reduced to a weakened state before the Buster Arm can be used on them: this is particularly true of bosses. It can, however, interrupt some enemy attacks, for example being able to disregard the "super armor" state of a berserk Hell Antenora.

The Break Age move hugely increases the damage of a grapple (while also altering the animation) and grants Nero "super armor" that renders the animation impossible to interrupt, although the Buster Arm will inevitably be destroyed upon completion. As with Overture's Break Age, the Buster Arm will not be destroyed if the attack fails to connect, and in it's specific case, it will also not break if it hits an enemy that is not currently able to be grappled.

While the Buster Arm may appear obsolete in the post-game due to Nero recovering his original Buster ability, this is far from the case. Seemingly for game balance purposes, as the Buster Arm is only supposed to be an imitation, it is far more powerful than the regular Buster (although it could be a deliberate showcase of Nico's superior engineering). For comparison, when used on a Hell Caina on Devil Hunter difficulty in The Void, firing all possible shots, the damage figures are as follows:

Buster Arm (damage for either is not affected by DT)

In other words, the Buster Arm is around twice as strong by default, and rather than being one-third stronger as with the DT Buster, the Super Buster is twenty times stronger than the basic Buster, and hence ten times stronger than the Neo Buster. While the Buster Arm receives no damage buff if used with Devil Trigger active, the player can hit the Buster button during the animation to pummel the enemy with Nero's wing arms for a few minor additional hits, as well as doing so with Summoned Swords. 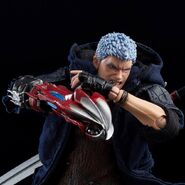