The Devil May Cry series features bonus Costumes that change the appearance of a character. Usually, changing costumes also offers some changes in gameplay.

In Devil May Cry the term used for switching costume is "Character Change." This option appears when starting a new game, prior to selecting difficulty, once the player has completed the game on Hard. 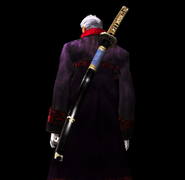 At the Title Screen, hold R1 + R2 + L1 + L2 + D-pad Up+Left + Left Analog-stick Down+Right until "Devil May Cry" (like when beginning a new save file) is heard. This will unlock all bonus modes, alternate costumes, and gallery entries. However, in the HD collection, this will disable saving, loading, and leaderboard scoring.

Vergil
Vergil is only playable in the Special Edition.

Lady
Lady's costume will change during her in-game appearances if Dante's "Legendary Dark Knight" or "Coatless DMC1" or Vergil's "Corrupt Vergil" or "Coatless Vergil" are being used. 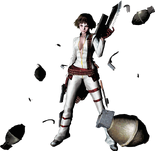 The original release of Devil May Cry 4 did not have any cosmetic costumes, only the Super versions for both Nero and Dante. However in the Special Edition several alternate costumes for both old and new characters were included.

A new feature introduced in this entry of the series allows players to set specific costumes on characters, and they will always be worn by the said character, even when not directly under the player's control. These outfits are decided by what costume they were previously set to when either in-game or in the Story Theater.

From the start of the game, you can choose 3 campaigns with different playable characters: Nero/Dante, Trish/Lady, and Vergil. You'll choose costumes after selecting a mission/mode.

Trish
Trish is only playable in Devil May Cry 4's Special Edition.

Lady
Lady is only playable in Devil May Cry 4's Special Edition.

Vergil
Vergil is only playable in Devil May Cry 4's Special Edition.

In Devil May Cry 5, each character gets an Alt Hero & Alt Heroine costume (called "EX Color Pack" (EXカラーパック, "EX Color Pack"?) in the Japanese version) when players pre-ordered the game or buy their select DLC. Nico, Lady and Trish aren't playable characters, so these costumes are only used to change their NPC looks in the cutscenes or during gameplay (when they are a guest AI).

At the NYCC 2018 panel, Hideaki Itsuno explained the origin of each EX costume:[2]

In addition, certain costumes are unlocked by completing in-game tasks: 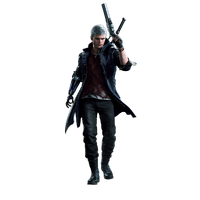 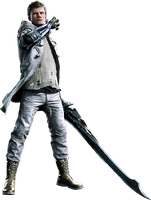 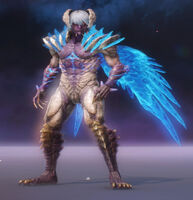 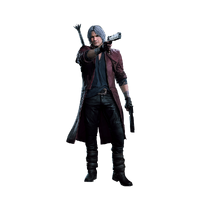 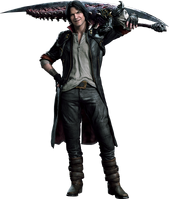 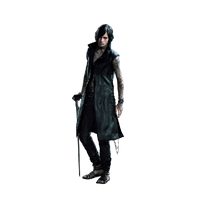 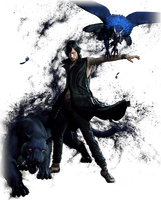 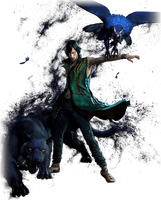 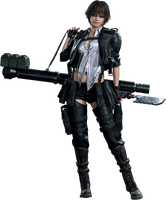 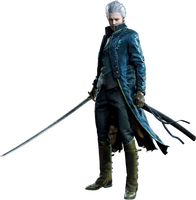 Retrieved from "https://devilmaycry.fandom.com/wiki/Costumes?oldid=100063"
Community content is available under CC-BY-SA unless otherwise noted.