The Damned Chessmen are netherworld-crafted chess pieces which appear in Devil May Cry 3: Dante's Awakening. They move of their own accord, and whether the game of chess is based on these demons, or vice versa, is said to be unknown.[1]

The Damned Pawn is the weakest of the Chessmen, but often appears in great numbers that can allow it to overwhelm its enemy.[2] Like a real pawn piece, it can only move forward one space (two spaces on its first movement), but attacks by swiftly uncrossing its swords to the spaces immediately diagonal to it. If it reaches the other side of the Damned Chess Board, it will be promoted to either a Damned Knight, Damned Bishop, Damned Rook, or Damned Queen. Fake Pawns also appear throughout the tower.

The Damned Knight is faster and stronger than the pawn, but still not much of a threat.[3] Like a real knight piece, it can only move in an L-shaped motion. It jumps very high during this movement, and spears the ground when it lands. It can attack during this movement, or by swinging its horn at nearby enemies.

The Damned Bishop is slow, but its magical skill makes it a potent support piece.[4] Like a real bishop piece, it can only move diagonally. It can summon a ring of fire which it focuses into arrows and shoots down its lanes of movement, or it can summon a small vortex of wind that heals it and nearby pieces. However, it is considered more dangerous than the Rook (see below), because the fireballs it shoots will spin around it at first damaging the player if close enough or trying long combos against him. Fake Bishops also appear throughout the tower. 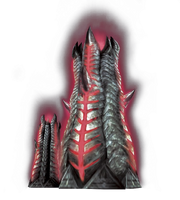 The Damned Rook is also slow, but is very powerful and can summon other pieces.[5] Like a real rook piece, it can only move horizontally or vertically, but it can also switch places with the Damned King when it castles. It attacks by opening up its body and firing lasers down its lanes of movement.

The Damned Queen is the most powerful of all the Chessmen, and so she only appears on the Damned Chess Board.[6] Her only attack is a swift forward ramming attack; like a real queen piece, she can move and attack in any direction, diagonal or straight, and can travel clear across the board. She can attack from off-screen, making her very dangerous, but she lets out a cackle before moving that serves as a warning, and her path is illuminated with violet smoke. She will let out a groan once defeated.

The Damned King is the most important piece because he controls all the others.[7] Like a real king piece, defeating it will end the game, and so he only appears on the Damned Chess Board. If attacked, he will attempt to castle and switch places with any Damned Rook, or will open up his core, before unleashing an extremely powerful blast of energy around him to halt his attackers. Like a real King, it can attack and move to the spaces immediately adjacent to itself. It should be noted that the Damned King piece seems to be based on Mundus himself.

The Damned Chess Pieces appear infrequently throughout the game, primarily inhabiting the Damned Chess Board in the Netherworld, where they play out a game of chess against Dante, (and Vergil in the Special Edition.) On this chessboard, they only move one at a time in order of weakest to strongest, and are invulnerable when not moving or attacking. All of the pieces have blue parts on them, which glow red whenever they attack. One main objective when fighting them is to rid the board of all Pawns and Rooks, as the King will more than often castle to evade damage should any rooks on the board exist.

Concerning combat, Damned Chess Pieces should be fought with strategic approaches with hard hitting and blunt weapons, as edged and fast weapons like the Rebellion and Ebony & Ivory will only become something of a hindrance as the pieces bear much endurance, being made of stone, and quickly unleashed power with ranges of effect is a key factor in the battle to wear them down quicker. Devil Arms like Cerberus and Beowulf, and heavy artillery Guns such as the Spiral and the Kalina Ann will prove much more effective against them. One should also have their reflexes keen and their observance quick, as Chess Pieces will increase in aggression and activity as the battle goes on.

Concerning Styles, it is best if the player has mastered at least one Style.

With Devil Arms, attacking is best in the Chess Piece's blind spots; one should also not forget about the Bishop's spinning fireball spell. Quick attacks work greater here, as they reduce the risk of getting caught off guard, but advanced players can find time to unleash more punishing attacks.

With Guns, it would be highly advisable that the Gunslinger style be mastered and having heavy power guns like the Spiral and the Kalina Ann be put to use, as Damned Pawns demolish in 3-5 hits when the pair is used successfully. When used together, despite being slow, they also have a switch out trick, allowing Dante to consistently fire a steady stream of blows. Safe recesses when Chess Pieces finish attacking can allow Dante to use more intricate techniques, such as Refractor, Trick Shot, and Hysteric.

All pieces are also highly vulnerable to the Royalguard Style Royal Release attack.

All of the Damned Chessmen were added to TEPPEN via its Adventures of a Tiny Hero expansion in July 2020.

Chess is an ancient strategy-based board game invented in India. It has long been regarded as a "game of kings", and is considered one of the most difficult games to master.

Retrieved from "https://devilmaycry.fandom.com/wiki/Damned_Chessmen?oldid=114951"
Community content is available under CC-BY-SA unless otherwise noted.