This article is about the classic Dante from the first four games. You may be looking for the new Dante from DmC.

Dante is the main protagonist of the Devil May Cry series. He is the second son of the demon Sparda and the human Eva, and the younger twin brother of Vergil. Dante is a paranormal mercenary, private investigator, and vigilante Devil Hunter dedicated to exterminating evil demons and other malevolent supernatural forces; a mission he follows in pursuit of those that killed his mother and corrupted his brother.

Since Devil May Cry started development as Resident Evil 4,[5] , Dante bears a strong resemblance to Leon S. Kennedy. Dante has white hair. It remains in a consistent style throughout his appearances, although there are a few minor changes. As a payment for being based on Leon, Dante's main Japanese voice actor, Toshiyuki Morikawa is now also Leon's main Japanese voice actor in 2010s.

In the first game and the anime, the coat seems to be plain with an upturned collar and short sleeves with black cuffs, though the coat lacks coattails. In Devil May Cry 2, the coat has a more pronounced buckled collar and a black chest plate of sorts resembling a vampire hunter's coat.

Finally, in Devil May Cry 4, the coat is given a much more detailed and stylish look, with western and Italian accents.

Earlier in the series' story, Dante is incredibly flippant, casually mouthing off to even the most powerful of demons, and he generally enjoys rubbing people the wrong way. He does mature as time goes by, but never really loses his attitude. Dante is sometimes presented as a show off as, on several occasions, he performs exaggerated and over-the-top moves. Dante is seemingly unflappable, not showing fear whether he's being attacked by the Seven Hells in his office or being swallowed by a giant serpentess demon. With the exception of Devil May Cry 2, Dante rarely shows any seriousness. He can be serious when the situation calls for it, but he still maintains a laid-back demeanor during such situations and is never with out a witty taunt or comeback. Dante can seem at times to be uncaring or even callous, but actually has a very strong sense of justice and prefers to fight fairly. He can be counted on to do the right thing, even if he makes cynical quips about it the entire time. Unusually, while he has issues with his own demonic side, Dante has little qualms about accepting demons that choose the side of good, such as Trish and Bradley. Though Dante is quoted as believing that "Humans are often worse than demons" in the anime, he refuses to kill full-blooded humans for any reason. Dante values family and friends very highly. He cared deeply for his mother and, despite their differences, for his brother, Vergil. Even after all the fighting the two did over the course of Devil May Cry 3, Dante still tries to save Vergil from falling into the Demon World, and goes so far as to cry over losing him.

Dante also enjoys fighting shown when he sometimes does not fight at his full potential so he can toy with his opponent or make a fight last longer. In the anime, Dante gets bored with fighting weak opponents and only finds entertainment in fighting strong opponents who will give him a challenge. Dante's enjoyment of fighting was reflected in his dialogue with Echidna during which he asked her if she agreed with him that a fight every now and then makes life more interesting.

In the animated series, Dante was shown to be one of the few characters in the Devil May Cry series to swear. Dante was frequently shown to be foul-mouthed, repeatedly swearing in almost every episode.

Despite verbally complaining about being in debt, Dante seems quite willing to perform missions solely for the good of them, and rarely enforces payment from poor clients. In fact, Dante will typically refuse any job he dislikes, regardless of how much it pays, but will immediately take on any paranormal cases, especially those involving demon hunting, with or without pay. Many of his clients take advantage of this good nature of his, and leave bills for property damage caused during the mission instead of paying for his services. He often borrows from Lady or gambles to repay these debts. However, he has extremely bad luck with all forms of gambling (Dante even has bad luck with a simple coin toss), and loses any game not involved with demon hunting. As a result, he is horribly in debt to Lady, and is often left with no money at all after she takes her cut. However, in Devil May Cry 4 Lady actually pays him a small amount for his "assistance", implying that he no longer owes her money.

Dante has a fondness for pizza, and while he complains about olives, he always ends up with them on his pizza. His liking for pizza was added because the director believes that pizza is the "best food ever". In the animated series, he is also shown to favor strawberry sundaes as well as pizza with it being pointed out on several occasions that those two foods are all he eats. He has a habit of getting roaring drunk; in the first volume of the manga, he mentions getting so drunk that he proposed to a mop. Template:Clear

While the first encounter serves tutorial purposes, the second fight is much harder, as you can't deal with him as with all previous bosses. It should be noted that, on higher difficulty modes, the battle in Mission 1 becomes just as difficult as the Mission 10 encounter.

Dante survived the Conception and is hired by an unknown man (Lucifer) to kill the protagonist, the Demi-fiend. He is a boss at first, and if defeated, he can later be recruited to the party in the entrance of the Fifth Kalpa in the Labyrinth of Amala. His appearance is based on his artwork in Devil May Cry 2.

Dante is a playable character in the PS2 version of the game and he must save Trish. He later appears in the PSP version of Viewtiful Joe: Red Hot Rumble as a bonus character, in where he lends his biplane, Karnival, to Captain Blue for a scene in one of his movies and he and the player race to defeat the boss of the stage. 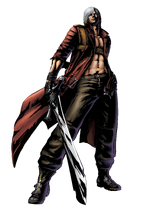 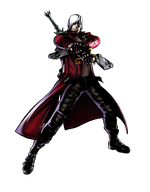 In the updated re-release, Ultimate Marvel vs Capcom 3, Dante receives a new ending where he is approached by Mephisto, who attempts to tempt Dante into signing a contract with him with the promise of reviving his mother and improving relations with Vergil. Dante responds by threatening to kill him unless Mephisto can provide him a job that will pay excessively, so Mephisto requests Dante to take out his son, Blackheart. He also appears in Ghost Rider's ending where he, Ghost Rider, and Trish threaten Mephisto's life, forcing him to undo a contract.

Cite error: <ref> tags exist, but no <references/> tag was found
Retrieved from "https://devilmaycry.fandom.com/wiki/Dante?oldid=55836"
Community content is available under CC-BY-SA unless otherwise noted.