The Demonochorus are fairy-like demons whose winged bodies and innocent childlike faces are encased in obsidian stone. They have strong magic powers, and flutter about as they cast sinister spells. They chant before the spell is cast as if singing,[1] but do not be fooled by these "children" with their angelic appearance and haunting voices.

They are very evasive as they fly in all directions, however most of the time they fly left and right diagonally rather than straight or backwards. They normally are above the player's standing height and hence they cannot be reached without jumping or using long-range weapons/firearms, however; they often drop to the normal height when chanting their spells. They have extremely weak defense, low HP, and the yellow circle that surrounds the player when they chant can be avoided by interrupting their casting, jumping in time, etc. Even if their spell is successful they will just cast a fire-like explosion which isn't very harmful. They can hardly be considered a threat except for the fact that they are always in groups of 3 to 5 and the time it takes to hit them. They are nothing to really worry about unless the player has to kill them quickly, such as on the way to the Uroboros building via the Demon World when they have to kill every demon within the time limit. 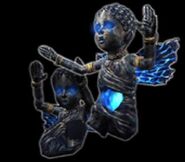 The appearance of the Demonochorus seems to be a demonic version of Putti, represented in Western Art as chubby human babies with wings; they are often erroneously labeled "Cherubs".