Devil May Cry: Peak of Combat

Devil May Cry:
Peak of Combat

Android, iOS
Devil May Cry: Peak of Combat (Simplified Chinese: 鬼泣-巅峰之战; pinyin: Guǐ Qì - Diānfēng zhī zhàn) previously known as Devil May Cry Mobile (also referred to in press as Devil May Cry: Pinnacle of Combat or Devil May Cry: War of the Peak) is a mobile spin-off game developed by the Chinese company NebulaJoy (formerly known as YunchangGame; 云畅游戏; Yúnchàng yóuxì) and supervised by the Japanese DMC development team. It is a mobile action RPG with online modes such as team battles and PvP combat. The game seems to take elements from a variety of games in the series like DMC3, DMC4, DmC: Devil May Cry and DMC5. After several closed beta tests the game was released for public test in Mainland China on June 11, 2021.

In December 2017, Yunchang Game acquired the rights from Capcom to make the game,[1] during an Oppo conference in China, it earned the award for "the most anticipated game",[2] the game has a strict and detailed supervision standard from Capcom to ensure the quality of the product.

In 2019, to coincide with the release of Devil May Cry 5, Yunchang Game released new images of the game, noting that they were "in-development game images", as opposed to using the Chinese word for "screenshot".[4]

The game was featured in the April 20, 2021 Apple Event. Additionally, the new international names for both the game and developer company were announced – “Devil May Cry: Peak of Combat” and “NebulaJoy”, respectively.

On June 16 NebulaJoy announced on Twitter they're working on English and other languages localizations of the game (although the post have soon been deleted).[5]

The gameplay of Devil May Cry: Peak of Combat follows closely to its PC/Console combat counterparts while simplifying some of functions due to limited screen space. Players navigate their way through massive levels while slaying demons, emphasis is placed on the methods used to deal with enemies, in the form of a Stylish Rank. Players can rank up Style points by defeating enemies with different skills and weapons, varying one's attacks further increases the gauge, while using the same move repeatedly will lower and stop the letter ranking until another style is used. Players can also dodge and taunt to increase their stylish ranking.

Several features in DMC PoC are either simplified, missing or unavailable compared to PC/Consoles counterparts:

Each character can have up to 4 weapons, 2 primary and 2 secondary. Each weapon has different stats and may provide different skills.

It is possible to unlock signature weapon skins and apply them on any weapon in the same category. Possible signature skins appeared in the game:

Each characters have 6 default stats and these are not shared between characters.

Unlike other games in the series, characters don't own signature weapons, so their movesets are shared between weapons in the same weapon category.

The game by default possessing 2 enemy difficulty modes: Easy and Hard. Easy is the default difficulty for new players and Hard mode increase enemy's awareness and damage dealt to characters, red orbs rewards are boosted by 30%.

Memory Corridor is the replayable game mode of main story, comes with 2 stage difficulty: Son of Sparda and Dante Must Die. 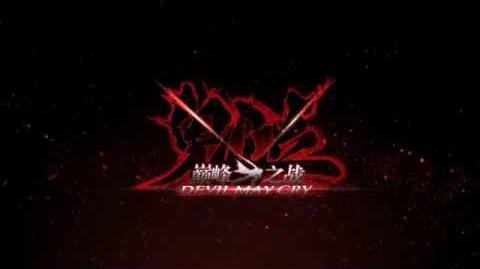 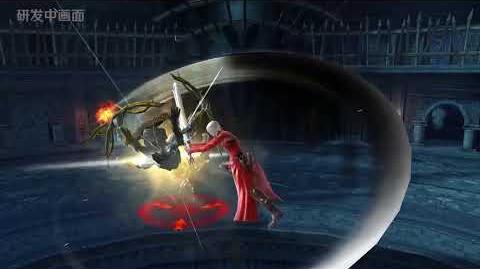 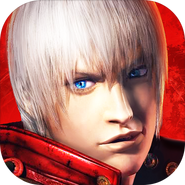 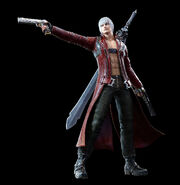 Lady with her motorcycle

Dante with the Rebellion

One of the enemies in the game

Cerberus in the game