Devil May Cry 3 for mobile, also called Devil May Cry 3D, is a primitive 3D mobile game based on Devil May Cry 3: Dante's Awakening. The game contains more than 36 missions, upgradeable weapons and abilities, and characters and enemies from Devil May Cry 3.[1] There are two versions of this game, one with 2D graphics and one with 3D graphics for Sony Ericsson phones.[2]

respectively. "3" and "1" execute a ranged attack, "#" is melee attack, and "0" makes Dante jump. Apps of the game adapted for touch screen devices also include a D-pad function that can be toggled on or off. Combo attacks can be performed as well. For example, pressing "6" twice will execute a Stinger, or pressing "6" followed by "#" will make Dante perform High Time. Pressing "#" again while in the air will execute a Helm Breaker.

Each mission is presented in a side-scrolling fashion, with the background advancing once Dante steps into the next panel. Enemies spawn by dropping down from the top of the screen, and will move to attack Dante. Dante can be moved in four directions on the floor, and can jump to avoid attacks. Mission objectives range from defeating all enemies, collecting Red Orbs, finding items, fighting bosses, and up to surviving for a set period of time. The player is scored at the end of each mission depending on the amount of damage the player receives and the Stylish Rank he or she achieves.

The player may also be able to upgrade the Rebellion and the Ebony & Ivory before every mission using the collected Red Orbs. These two weapons increase in damage once upgraded, and the last upgrade level is Level 5, and are the only ones available at the 2D version.

The mission system is presented by a triangle containing squares which represent the mission themselves. The player has to choose a single "path" up to the end, and once completed, a new path can be unlocked. This feature makes the game very repetitive.

Following a more traditional approach of the console version with free 3D movement, the final boss is Cerberus rather than Vergil. The plot guides Dante through rescuing the city instead of climbing the tower as well. Other weapons and upgrades are obtainable at the end of certain routes.[3] 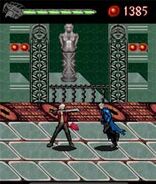 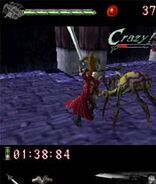 Dante fighting in the 3D version

All the weapons on the 3D version by Brave Fencer Musashi.

Retrieved from "https://devilmaycry.fandom.com/wiki/Devil_May_Cry_(mobile_game)?oldid=98471"
Community content is available under CC-BY-SA unless otherwise noted.