Devil May Cry (デビル メイ クライ, Debiru Mei Kurai?) is the titular shop that Dante owns in the Devil May Cry series.[1] The origin of the name comes from the words Lady used to comfort Dante over Vergil's loss. Dante later renames the store to Devil Never Cry[1] based on what he himself said to comfort Trish, although he later changes the name back per her request.[2]

While incorporating same elements, the shop's design changes slightly over the course of series.

In Devil May Cry 3 and its respective manga it is a large standalone building with an arched roof over the porch and double door. Seeing as Dante has not named his business yet, there is no sign above the door. Inside is one square-shaped room resembling a studio, with wooden floor and plaster walls with wooden panels on bottom part. Looking from the entrance, there is a set of simple stairs on the left, leading to a narrow landing. Underneath the landing is a white fridge, couple of couches and large speakers. On the left side is also a pool table. On the right side of the room, in the corner is an antique jukebox, and next to it a set of drums and an electric guitar. In front is a large, antique desk with chair, on it a photo of Dante's mother and an old rotary phone. On each side of the desk are doors, left one are leading into the bathroom of bare design and with the recurring poster of a woman with an eye-patch on the door from inside, while the right one should lead into the bedroom. On the wall directly behind the desk is a huge trophy of unknown origin and lupine appearance. This office is destroyed at the beginning of the game.

In Devil May Cry, the building has a lower, square shaped porch roof and wooden blinds on windows. Above the door is a pink neon sign with "Devil May Cry" written in cursive and a silhouette of a woman with guns. From the inside wooden boards and panels are covering all the walls. The ceiling seems to be lower, the room generally look smaller and there are no stairs, making the room look less like a studio and more like an office. The furniture is the same, sans the huge trophy which is now missing, but its position is different. There is a summoning circle drawn on the floor with yellow paint.

Devil May Cry 2 reuses the design of Devil May Cry, although the jukebox is not visible here and Dante instead uses a more modern stereo system. There are also some wardrobes added to furniture, with bookshelf.

Devil May Cry: The Animated Series has the shop based on the destroyed Devil May Cry 3 version, including the unknown huge trophy on the wall behind the desk. This time however, it is right door that lead to bathroom, whereas behind left door is a set of stairs leading up to the bedroom. There isn't much of the bedroom seen, just a corner of a simple bed, a tall arched window with green curtains and a couple of smaller wardrobes, one of which has a bookshelf. The neon sign outside features silhouette of Dante pointing a gun to the left, with Rebellion extending behind his back and through word "May". In the anime it is the only time the huge trophy is put into function, in episode 5 a group of horned Sargasso appear on it, one above the other.

Devil May Cry 4 features yet another revamp of the building. There is no porch or any roof above the door, once out they step directly on the small staircase with railing. There are no figures as part of neon sign, just name of the shop in cursive. Walls are covered in plaster and everything is in obvious bad shape and full of trash. The area where Dante's desk is located is now slightly elevated on a wooden platform with two stairs and a carpet. Behind him is a wide, round column on which Sparda is hanging. Staircase on the side has a different railing and the round, decorated landing it leads to now spans over the wall behind desk, with the round column holding it up. Underneath staircase are large speakers, plants and a bookshelf hidden behind. On the left from Dante is a nook with bar in the corner, another "Devil May Cry" neon sign above it, trophies on the wall and a door next to it. If one looks from Dante's position to front left, one would notice another door and what seems like a small room. The contents of that room were not revealed.

The office's furniture always consists of an antique jukebox worth quite a bit of money, a billiard table with snooker cues, a sofa, and Dante's personal desk and chair. Instruments are also present, usually only a drum set although an electric guitar has accompanied it. Other pieces of clutter—such as boxes, a potted plant, a small refrigerator, a dart board, a trash can, and a coat tree—fill in the space, although their style and position are rarely preserved between appearances. The desk always has a framed picture of Dante's mother and an old-fashioned, rotary dial, black telephone on it.

By the time Arkham arrives to lure Dante to the Temen-ni-gru, Dante has purchased his shop in the Residential Area, but has not decided on a name for it. After putting an end to Arkham's plot, he decides to name his shop after the words Lady used to comfort Dante over Vergil's loss:

“
Maybe somewhere out there, even a devil may cry when he loses a loved one, don't you think?
”
—Lady, Devil May Cry 3: Dante's Awakening

After the events on Mallet Island, Dante renames his shop "Devil Never Cry" based on what he told Trish to relieve her of her guilt for betraying him:

“
Trish...devils never cry...These tears, tears are a gift only humans have.
”
—Dante, Devil May Cry

The name, however, did not last and was later reverted to "Devil May Cry."

Devil May Cry: The Animated Series[]

During the events of the anime, the shop was occupied by Dante, Morrison and Patty who frequently visits the shop after demons tried to kill her. Throughout the series, Patty served as the maid who usually pestered Dante about his messes and often made bets with him at his pool table. Also during the series, it was frequently visited by Trish and Lady who most of the time came to collect money from Dante or to help him with a job. At the end of the series, Patty moved back in with her mother while Dante, Morrison, Trish and Lady all left the shop for a job outside the city and after Dante left, Patty returned to continue cleaning for Dante while he was out.

After the defeat of Argosax and Arius, Lucia is seen at the shop, flipping the coin Dante gave her before he entered into the demon world to defeat Argosax. She sadly wonders if Dante will come back from his journey to hell as Sparda once did. She then hears the sound of a motorcycle outside, and runs out to see who it is.

When Lady visits the shop, she mentions to Dante and Trish who were eating pizza that a group in Fortuna, called the Order of the Sword, worships Sparda as a God. This intrigues the duo, and Trish goes as far as steal the Devil Sword Sparda, and writes a message on the wall: "See you there". It's later revealed that Trish brought the Sparda to Sanctus in order to gain the Order's trust, while pretending to be "Gloria" all the way through.

After the events of the game, Lady comes back to the shop again, this time bringing the payment. However, the money is quite lacking, and the two girls start arguing. Dante settles the deal by saying they take what they can get. As Lady is about to leave the shop, the phone rings and a new job opportunity has arrived, the trio then leave in their own stylish way; "Let's rock!".

When Morrison comes up to visit Dante at the shop, he mentions that he's got a new job for him, and one that will pay him, too. Before Dante is introduced to his new client, the phone rings and it's revealed that Patty is the one calling him, asking Dante to be present at her 18-year old birthday party, to which Dante abruptly hangs the phone, without replying to her invitation.

His new client then appears - V, a wicked man covered in tattoos, hires Dante to take care of a new demon, he also states that this demon is Dante's reason for fighting. Dante accepts his new job, and starts making his way to the Qliphoth in Red Grave City to face Urizen, the demon V mentioned.

At the end of the game, after Dante and Vergil return to hell willingly, Lady and Trish are back at the shop, noting that Dante hasn't come back yet, and wondering if he will ever do so. Morrison appears, and brings the ladies a new job.

Presumably located somewhere within the Residential Area lies the main branch of Devil May Cry, in which the building is owned by Dante.[3] This branch has a number of devil hunters and other individuals affiliated with it. The Devil Hunters in this branch often go out onto jobs in which has the secret "password" to separate normal jobs from the more unique ones[4] or may have a trusted booking agent arrange a job themselves.[5] Some also even individually ask the Devil Hunters to take a job.[5]

In the novel Deadly Fortune, in the aftermath of the fall of the Sanctus and the Holy Knights in the Order of the Sword, former Holy Knight Nero opens a devil-hunting business and is named Devil May Cry when Dante supports him, sending him the same neon sign in which is the logo for the shop. Their base of operations is located in an apartment somewhere in Fortuna in which both him and Kyrie rented.[6]

At some point in time, Nero and Kyrie changed the format of their business and began operating mobile.[7] However, they also kept the logo used for their former Fortuna branch and operate from a personal RV. During this point, they are also joined by a new inventor, Nico.[8]

The Devil May Cry shop is featured in the "Jackpot!" card (No. DANTE 0013), however, the logo inside is purple instead of red. 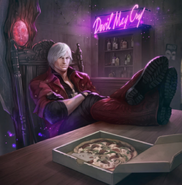 Devil May Cry shop in TEPPEN