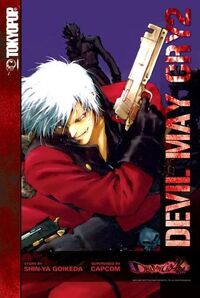 Devil May Cry 2 is a light novel that covers the period after the first Devil May Cry video game until the events of Devil May Cry 2. This release features a different art style than then the previous novel, with the artist utilizing shading and ink washes in addition to black and white.

It was written by Shin-ya Goikeda and illustrated by Yuuchi Kosumi (瑚澄 遊智, Kosumi Yūchi?) under supervision by Capcom, and translated by Paul Cheng and Gemma Collinge. The Japanese version was published in 2003 by Kadokawa Shoten Publishing, while the English adaptation was first printed by Tokyopop in November, 2006.[1]

The novel begins as a redheaded woman, Beryl, storms through a temple. As a priest tells her that no evil is within the temple, they are attacked. Warned by a scar, Beryl expends her anti-tank gun on her foe before it flees. Dante and Enzo talk about work in Dante's shop, Devil May Cry. As they discuss Dante's work habits and Trish's non-presence, Dante gets a call for work. As Enzo drops Dante off near the temple, Dante races towards the evil he feels and discovers humanoid demons, who he fights. Enzo finds Beryl on the road and agrees to take her back up the mountain. Beryl catches up with Dante as he finishes his foes, and she nearly hits him with her weapon by accident. Beryl then explains the Beastheads, a demonic statue which she has chased for years.​

A youth named Ducas is awakened by a demon crashing through his roof. In the demon's hands is the Beastheads statue, which Ducas takes. Chen, boss of organized crime in the area, quickly arrives. Chen dismisses Ducas and instead focuses on the dead demon and discovers that Ducas has the statue. Meanwhile, Dante broods about the Beastheads. Beryl locates Dante's office, having tracked down the Beastheads to Ducas. Beryl persuades Dante to help her investigate.

Ducas' good luck continues as he is learning to control the Beastheads, allowing him to see the future and sees Dante killing him. Moments later, Dante and Beryl crash through the window as Ducas hides. After they leave Ducas escapes by sprouting feathered wings, which Beryl and Dante notice. Ducas lands on a building, encountering Chen. Chen offers Ducas safety, sending his demonic minions to stop Dante. Dante dispatches the foes with ease, though Beryl finds herself overwhelmed. As Dante and Beryl decide to confront Chen, Ducas finds himself alone on a yacht. He places the Beastheads in his mouth and chews it to pieces to consume its power.

The Beastheads, now an enormous three-headed dog, tracks Dante and Beryl to a sea-side cliff. The despair the Beastheads causes nearly incapacitates Beryl. Seeing Dante fight reminds Beryl of the Dark Knight, Sparda, a fairy tale she was told as a child. She gets up and aids Dante, though defeating the Beastheads causes them warp somewhere. Beryl dreams, remembering how the Beastheads corrupted her father. She awakens in a cave with Dante. Dante investigates and discovers they are in a parallel world where Mundus captured him as a child and his brother Vergil led Mundus' lieutenants against him. Dante agrees to fight Mundus a second time. The village housing the rebel demons is attacked by an army, all of whom resemble Trish. Mundus' former lieutenants give their lives to aid Dante in killing Trish, an action he regrets. Griffon leads Dante to Mundus' castle. Dante and Beryl enter and Dante defeats Mundus a second time while Beryl watches.

Beryl and Dante awaken in Chen's labs, where Chen performs experiments on demons. The building vibrates as Chen acquires the Beastheads' power. They attack Chen, killing his minions and causing him to flee. Dante and Beryl follow and are caught in Chen's trap. Chen discovers that the Beastheads consumes human souls but replenishes demonic power. Dante carves his way out of the trap while Chen devours the Beastheads statue.

Chen and Dante clash, both using the Sparda's sword-style. Chen gains the upper hand until Dante hurls his sword through Chen's head. Beryl uses her gun to punch through Chen's defense, allowing Dante to destroy the Beastheads. The book ends months later with a white-hilted dagger flying through Dante's front window, bearing an invitation to the museum seen in the beginning of Devil May Cry 2.

The translators of the novel deliberately chose not to translate the Beastheads' name, lit. Kemono no kubi (Heads of the Beast, lit. Kemono no kubi'?) into Cerberus due to the appearance of the Cerberus in Devil May Cry 3: Dante's Awakening, despite the obvious resemblance.[2] Likewise, they maintained Vergil's alias as Nelo Angelo despite feeling that Nero Angelo (lit. Black Angel) was more correct.[3]