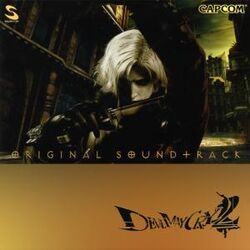 The original soundtrack released for Devil May Cry 2. It was released on October 15, 2004 as a 2-disc set with Masato Koda, Tetsuya Shibata and Satoshi Ise credited as the producers.[1]

Retrieved from "https://devilmaycry.fandom.com/wiki/Devil_May_Cry_2_Original_Soundtrack?oldid=99161"
Community content is available under CC-BY-SA unless otherwise noted.