After TGS 2018, Devil May Cry 5 was added to the Xbox Marketplace, PlayStation Store and last on the Steam store. Alongside the game, multiple Downloadable Contents were offered depending on which edition was bought.

On January 8th, 2019, a press conference for Devil May Cry 5 was held at Seoul, South Korea. There, Hideaki Itsuno stated that there was the possibility of adding more playable characters if there was enough fan demand.[1]

On February 7th, Michiteru Okabe stated in a DengekiOnline interview that more DLC was planned beyond just the Bloody Palace, but did not specify its nature, which could have been alluding to the DLCs that unlock in-game content.[2]

The following was tied to pre-ordering any edition of the game, regardless of the platform, though the first is now available as paid DLC.

The following was only given by pre-ordering the Xbox One version of the game, regardless of the edition.

The following was originally only available as a download code from Amazon.co.jp, where it was stated that the validity period of the product code is until March 8, 2021, with no scheduled delivery at a later date.[4] Some codes were also given out for free for random users on Xbox One.

On May 7, 2019 the Monkey Business became available as a free DLC for all regions and platforms.[5]

The PS4-only theme is only available if one pre-ordered the game digitally on a PS4. It cannot be bought on the PlayStation Store separately. It features a remix of the Devil Trigger soundtrack as its background theme. 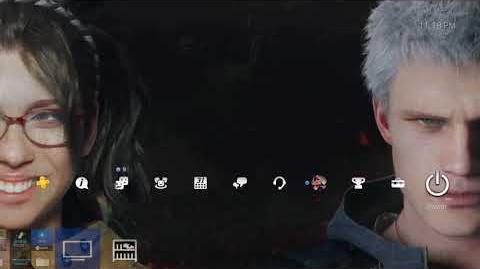 A second PS4 theme is available by purchasing the Devil May Cry 5 PlayStation card in Japan only.[6] This version has Trish and Dante in the background at the top and the Deluxe Edition keyart at the background of the bottom.

The Devil May Cry 5 Wallpaper was given to players upon pre-ordering any edition of the game on Steam.

In Japan, a different wallpaper set is given to players who purchased the game on Joshin. Two wallpapers are given, one for PCs and another for smartphones.[7]

Joshin wallpaper (Mobile)
Add a photo to this gallery

The Bloody Palace was first announced on December 6th, following the trailer that premiered shortly after the 2018 Game Awards.[8] It was later confirmed in a tweet by the official Devil May Cry Twitter account that the game mode would be available on April 1st as part of a free update.[9]

After the game released, certain in-game content became buyable with real money and microtransactions were added to each of the platforms it's available on. This also marks the only way to obtain the Alt Hero & Heroine costumes after the game's release, with the exception V and Vergil's Alt costumes which can be unlocked by playing the game naturally.

The following are the patches on the console versions of Devil May Cry 5.[10]

Retrieved from "https://devilmaycry.fandom.com/wiki/Devil_May_Cry_5/DLC?oldid=94226"
Community content is available under CC-BY-SA unless otherwise noted.