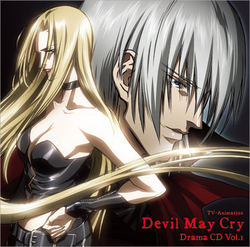 Devil May Cry Drama CD Vol.1 - Old Friends is a radio drama that features the cast of the original animated series. The CD was released in Japan on Dec. 21, 2007 and featured an original story.[1] A second Drama CD was published in Feb. 27, 2008.

Enzo asks Dante to help him find a demon. After failing to kill the demon Enzo must hide and be protected by Lady while Dante and Trish track it down and kill it.

When the shop was still named Devil Never Cry ,[2] Dante and Trish helps his old friend Enzo Ferino, a broker who doesn't believe in demons, in a job to investigate some ancient ruins. Enzo obtains a relic that resembles a gun. Trish later speculates that the gun might be crafted by Machiavelli, a legendary demon gunsmith who supposedly crafted weapons such as Artemis. Worried about Enzo, Dante and Trish look for Enzo and find him being consumed by the relic.To save his life, Dante has no option but to cut his arm. This event makes him feel sorry for Enzo. Trish leaves Devil Never Cry to prevent others from falling victim to devil arms like Enzo, and asks Dante to change the name of the shop back to Devil May Cry.

Back in current day,[3] Dante asks J.D. Morrison to bring the money he earned to Enzo. Dante owes money from Enzo, who now owns a pawnshop that deals in devil arms, which means he has to pay interest every year or Enzo will start selling his devil arms for money. Morrison, Lady and Patty meet Enzo, and wait for Dante who said he's going to show up later. During this time, a mysterious young woman arrives and sells some kind of a puzzle to Enzo. Lady touches the puzzle out of interest, which later turns out to be one of Machiavelli's creations, and gets possessed by some evil force within it. Dante arrives just in time to save everyone, but he doesn't have any weapons with him. He saves Enzo's on the condition that Enzo wipes off his debts. Enzo agrees, and Dante starts using devil arms he obtained from Cerberus and Alastor to fight Lady. Dante uses Round Trip to destroy the gun possessing Lady, saving her without harming her. Dante brings all the devil arms to his office as promised.

Later, Trish shows up and explains to confused Morrison how Lady wasn't actually possessed and it was all a ruse to retrieve the devil arms so that they can lure out a demon who has been hunting devil arms. Trish also mentions how Dante didn't want to involve Enzo in another incident, but Dante stops her from talking too much. The demon gets lured out and quickly killed by Dante, Trish, and Lady. After that, Dante asks Morrison to return the devil arms to Enzo. On the way there, confused Patty asks Morrison why, since that means him owing money again. Morrison answers it's a gesture of friendship between them. Patty, who initially thought Dante was owing so much money just because he's lazy, now wants to learn more about Dante and follows Morrison to ask Enzo some questions about him.