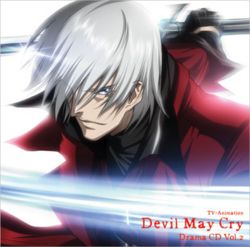 Devil May Cry Drama CD Vol.2 is a radio drama that features the cast of the animated series. The CD was released Feb. 27, 2008 in Japan,[1] and features two separate stories.

A woman named Foster, who runs the orphanage associated with Patty Lowell, hires Dante. A devil disguised as Peter Pan kidnaps the children from the orphanage, takes them to a place called Neverland, and convinces them that they are the Lost Boys and Dante is Captain Hook. Peter Pan is finally defeated by Trish.

The Devil May Cry crew is investigated by two police officers, Steve and McClain. Dante and the others are cleared of suspicion after being interviewed.

The first story heavily references Peter and Wendy, a play and its novelization by J. M. Barrie about a fairy-like boy named Peter Pan who lives on the island of Neverland along with several others, among them his friends, a group of boys called the Lost Boys, and an evil pirate, Captain Hook.

The cops featured in the story are possible references to Steve McQueen, the actor, and John McClain, the lead character of the Die Hard series.