Action figures of Devil May Cry characters have been released for fans to collect and enjoy.

Toycom produced a set of three-inch tall action figures based on the original Devil May Cry, which were released in May of 2003.[1] All figures come with interchangeable parts and interconnectable bases. Figures include blue, purple, green, and red Marionettes, two Dantes, Trish, and Nelo Angelo.

A set of six, three-inch tall action figures based on Devil May Cry 2. Figures come with interchangeable parts and are poseable. The series includes two Msira demons, two Dantes, Lucia, and Trish. 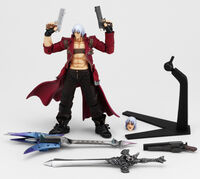 Revoltech released a 15cm tall Devil May Cry 3 Dante action figure. The figure is fully poseable, and comes with a swappable head, and accessories Rebellion, Nevan, Shotgun, and Ebony & Ivory.

On October 5th, 2012, Squre-Enix released a set of Devil May Cry action figures for its Play Arts series in Japan.[2] The set includes: Devil May Cry 3 Dante with Ebony & Ivory, Rebellion, and Nevan, which itself can transform from guitar to scythe form. and Devil May Cry 3 Vergil with Yamato and Force Edge. The figures stand approximately ten inches tall each and are fully articulated.

Play Arts also produced a Devil May Cry 4 set of Nero with Blue Rose and Red Queen, and Dante with Rebellion and Ebony & Ivory. The Devil May Cry 4 figures have been discontinued.[citation needed] 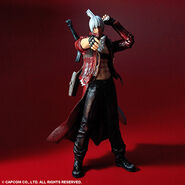 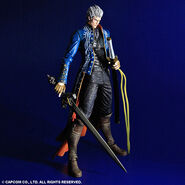 Devil May Cry 4 Dante
Add a photo to this gallery

On June 11th, 2019, a new Nero figure made by Sentinel became available for pre-order, it was planned to release sometime in December, 2019.[3]

On June 26th, these figures were on display at amiami Akihabara Radio Kaikan in Japan, it was expected to be on display until July 8th.[4]

One key difference between these figures and the prior ones is that they come with more weapons for Dante and Nero. 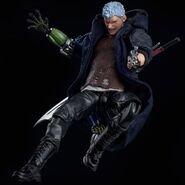 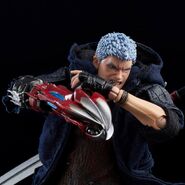 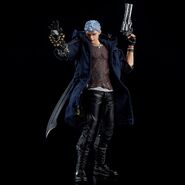 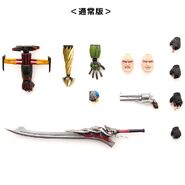 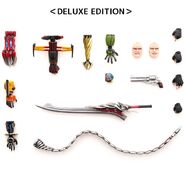 Retrieved from "https://devilmaycry.fandom.com/wiki/Devil_May_Cry_action_figures?oldid=99090"
Community content is available under CC-BY-SA unless otherwise noted.