Various statues have been released of Devil May Cry characters for fans to display and enjoy. 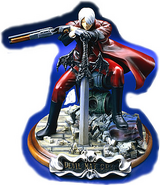 Made for Capcom by KOTOBUKIYA, this statue of Dante from Devil May Cry 3 stands approximately 27cm tall and comes with interchangeable Rebellion and Ebony & Ivory weapons.

Also made by KOTOBUKIYA, this statue of Vergil comes with interchangeable weapons Yamato, Yamato's scabbard, and Force Edge, and an alternate head that looks exactly like Dante. 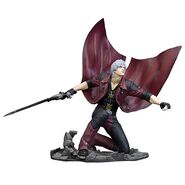 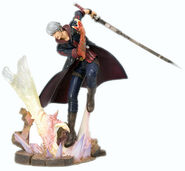 On March 26th, 2019, Hideaki Itsuno tweeted that he was checking on the coloring of new Kotobukiya figures based on Devil May Cry 5.[1] A month later, on April 17th, these figures because available for pre-order.[2]

Dante's figure features the Rebellion, while Nero's not only includes the Gerbera, but also the Punch Line and Overture of Devil Breakers.[3][4]

On April 24th, 2019, a Vergil action figure (also made by Kotobukiya) was announced, however it was not available for pre-order just yet.[5]

On May 15th, 2019, Prime1 Studio announced that they'd be making a new set of Devil May Cry 5 action figures.[6] Seven days later, the Dante one became available for pre-order, it was planned to release sometime in November, 2019.[7]

On May 25th, Hideaki Itsuno tweeted that he has seen the figures in person.[8] On June 25th, it was revealed that pre-orders for the Nero figure would start on June 28th.[9] On July 11th, the scheduled release of the Nero figure was stated to be around July/October of 2020.[10]

Retrieved from "https://devilmaycry.fandom.com/wiki/Devil_May_Cry_statues?oldid=99089"
Community content is available under CC-BY-SA unless otherwise noted.