Devil May Cry 5
“
A blade born when Dante absorbed the Rebellion and the Sparda into his body. The weapon shares both his name and his will.
”
—Description, Devil May Cry 5

Devil Sword Dante is the newly formed legendary devil sword of Dante, forged through employing the newfound power of his Sin Devil Trigger, which he awakened after impaling himself with his broken demonic sword Rebellion and merging himself with it along with his father's legendary blade, Sparda.

The Devil Sword Dante's appearance, is relatively simple compared to its counterparts: appearing as a large two-handed sword made mostly of a dark substance that resembles solidified lava, with claws running up its length, talons for a handguard, and a red jewel on its pommel. When using Sin Devil Trigger as well as certain attacks, the blade splits open in the middle, increasing in length, while generating a second blade of fiery red energy.

When Dante stumbled upon his old childhood home, he pondered about why his father Sparda had given him the Rebellion. When Griffon asks what he was muttering about, he remarks upon all the times he had been impaled repeatedly over the years by his own sword. Reflecting on the Yamato's ability to sever one's own being, Dante wonders what the Rebellion can do and promptly shoves it through his gut. Doing so caused his body to not only absorb the Rebellion into his being but his father's sword on his back as well, causing a massive burst of energy and transforming his Devil Trigger into its most powerful form. Without a word, Dante flies into the air and heads back to the Qliphoth, quickly barging back into Urizen's lair and saving Nero at the last minute from the Demon King's chokehold. Manifesting a new sword from his being bearing his name, Dante fought Urizen, pushing him back.

Looks like Dante's following in his daddy's footsteps, swinging around a demon blade with his own name.

I dunno if he used his own power to fuse it with Sparda, or if it was Rebellion's doing... Either way, anyone can see this is one hell of a new weapon.

Devil Sword Dante is unlocked at the end of Mission 12 when confronting Urizen along with Sin Devil Trigger. In the first playthrough of the story, it replaces Sparda, just as the latter replaced Rebellion, and renders both swords inaccessible until the game is cleared. It is significantly different compared to Dante's other two swords.

Devil Sword Dante switches most of Rebellion or Sparda's Swordmaster moves to be part of its basic moveset. Aerial Rave is now the basic air move with Helm Breaker triggered by pressing back and melee like Nero's Split, while Prop and Shredder have been made the final two hits of DSD combo C. Dante also gains access to Drive as a back to forward melee directional attack and Overdrive as its follow up. Drive can be charged by holding the melee button up to two levels (starts with no charge) with Overdrive keeping that level. Although not mentioned in the game Quick Drive can be executed by inputting the command for Drive right after the first basic combo melee hit – this one cannot be charged or followed by Overdrive, though.

The real show-stopper for Devil Sword Dante, however, is "Swords Formation." This is a charge move that summons glowing red swords simiilar to Vergil's Summoned Swords, which enhance Dante's capabilities. Invoking them costs two bars of the DT gauge. They will remain even if the player switches to a different melee weapon, and are automatically invoked for no cost, regardless of the selected melee weapon, if Dante activates Devil Trigger. The latter ability only requires that Dante have Devil Sword Dante in his inventory.

In Swordmaster mode the swords follow a formation called "Chaser." In this, the swords will copy Dante's melee moves, dealing extra damage and sometimes having unique effects such as Balrog's kick-launcher Updraft now kicking the enemy into a persistent spinning sword-wheel that forms in mid-air. Devil Sword Dante's own Swordmaster moves are completely different to the other swords, using the summoned swords to perform moves analogous to a basic ground combo (Four Handed), Stinger (Stingers), High Time (High Times) and Round Trip (Round Trips). All of these are performed independently of Dante himself, allowing him to continue performing moves of his own. They do not require Swords Formation to be summoned in order to use them, but will be more powerful if it is: Swords Formation will not interact with Dante's normal melee attacks while one of these attacks is being performed, however. Only one of the attacks can be active at any given time, so Round Trips will preclude the use of the other moves until it concludes. The variant of Round Trip also has the advantage that Dante does not throw his actual sword, and so he can still use it while the attack is dealing damage.

The only Swordmaster move from the other two swords that Devil Sword Dante retains is Dance Macabre. This works in the same way as before, dishing out a powerful canned combo focused on one enemy which hugely increases the Style meter but cannot actually kill an enemy until the final hit. However, it is now a back-to-forward command rather than just forward, as that is now used for the Swordmaster version of Stinger. Like all back-forward commands where there is also a forward command move, the back-forward move needs to be performed fairly quickly to avoid triggering Stingers instead.

Swords Formation and Devil Trigger also modify the other Styles significantly. If either is active, when using Gunslinger the swords will be in a formation called "Interceptor." In this formation they array themselves behind Dante in a manner reminiscent of Vergil's swords or some of Lucifer's moves. In this mode, the swords will automatically target and fire themselves at nearby enemies, dealing fairly minor damage but with quite a heavy knockdown effect. They will also target some incoming enemy projectiles, such as Summoned Swords or a Nobody's eyeball bombs.

In Trickster mode the swords form a formation called "Reactor." In this formation the summoned swords do not attack, instead hovering near Dante's feet. Trickster is massively enhanced by this, doubling Dante's evasive abilities: he can now perform a double ground dash with no delay between dashes, and do Sky Star, Air Trick or even Air Hike twice without touching the ground. The extra evasive moves have an associated animation where the summoned swords form platforms under Dante's feet.

In Royalguard, the swords enter a formation called "Escort." This has the swords follow Dante in a vertical bar formation. When Dante guards, they array diagonally forming a structure resembling a shield. In this formation, the Swords increase the amount added to the Royal Gauge when blocking attacks, and will automatically reduce the damage of all attacks that successfully hit Dante. If the attack Dante is struck by is minor enough, Escort will even prevent the current Stylish Rank from decreasing, although he will still flinch a little. More powerful attacks will override this and penalize the stylish rank like normal, however.

Acquiring Devil Sword Dante also grants access to Sin Devil Trigger mode, and is the only weapon used for Dante's melee strikes in that mode. He does not actually have to have it equipped: post-game, he can enter Sin Devil Trigger mode with either Rebellion or Sparda as his selected sword, or even without any weapons equipped. 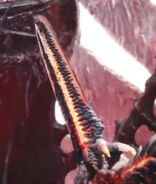 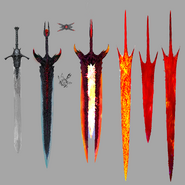 (back)
Add a photo to this gallery

Making the Devil Sword Dante! - Devil May Cry 5 Master & Apprentice
Add a photo to this gallery
Retrieved from "https://devilmaycry.fandom.com/wiki/Devil_Sword_Dante?oldid=114827"
Community content is available under CC-BY-SA unless otherwise noted.