The story is written by Guillaume Dorison, A.K.A. IZU, and is illustrated by Robin Recht and Patrick Pion. The first of the two issues was released digitally by Titan Comics on January 24th, 2013 with a print version to follow on May 15th and June 19th. 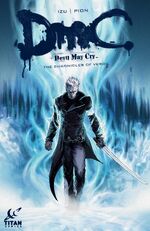 The story opens with a flashback one year before the events of DmC: Devil May Cry. Dante, who is imprisoned in Hellfire, is cornered by a couple of demons. Pinned down, Dante hears the voice of his father, Sparda, and is given the Rebellion. Back in the present, Kat is at a Virility event with Kylian in Limbo City. The Virility workers, who are demons in disguise, are handing out free samples of the Virility soft drink to the crowds of people. Moments later, the Virility event is attacked by the "masked terroist," Vergil. With the help of Kat's "dreams," Vergil was able to track her. Vergil then says they will meet again and shortly after, Kat is arrested and taken to Central Prison for conspiring with the terrorist group, The Order.

Two days later, Kat has a "nightmare," which, in reality, is her spirit wandering around in Limbo. She is attacked by a large demon but is saved by Vergil. He explains to Kat that her Astral Form was imprisoned in Limbo and that he killed the demon who has been harassing her. Waking up in the human world, Kat is bitter towards Vergil due to the fact that he is the reason she has been held captive. Kat believes that all of her trips to Limbo since she was little were dreams that she used to escape "this rotten world...", and sometimes she would get a "nightmare" instead. Vergil explains that all of her dreams were real and reveals his name and his half demon heritage to Kat. Sceptical, Kat demands answers from Vergil, to which he explains her the truth about Limbo, her world, and the demon king Mundus.

Still unsure about him, Kat calls for help but is instead ambushed by demons, forcing Vergil to fight them while they are dragged to Limbo. He nearly fell victim to the Phlegethon if not for Kat's psychic powers allowing him to escape, causing Kat to lose consciousness before being taken to Hellfire. Meanwhile, Kat joined Vergil in Limbo where he revealed her his origins and commanded her to find Dante. She eventually fell into Hellfire and fell victim to the Onyx, forcing her to detach her soul from her body to escape the pain. 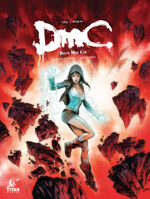 The story continues with a frustrated Vergil finally reaching Hellfire, no longer needing Kat while ordering her to return to the human world and search information about Dante, to which she returned to her body and awoke to find her friend Kylian arrested as well, alongside others who were framed for terrorism. She asked about Dante which caused the demon guards to go insane and mercilessly kill every prisoner before Vergil arrived in time to save Kat, asking where Dante is, to which she replied that he's no longer imprisoned, something that shocked Vergil. Unfortunately, the Onyx arrived and easily defeated Vergil, throwing both him and Kat to the bowels of the prison.

As Vergil regains consciousness, he notices that Kat is able to manifest her astral form in the prison, which acts as a giant rift between the two universes, and tells Vergil that she knows how to find Dante. They travel to the control room of the prison, the "brains" of Hellfire which will allow Kat to find information about Dante by connecting with it, something that takes a huge toll on her. She finally locates Dante's data and displays it for Vergil to see, revealing that Dante managed to escape with his over natural powers' awakening. However, the prison itself takes over and forces Kat to return her and Vergil to the human world, but the prison sent the Onyx after them, greatly hurting Kat in the process.

Enraged, Vergil awoke the Devil Trigger and singlehandedly destroyed the Onyx, but the creature merged all its spirit forms to unleash its true form, which resulted in it becoming too powerful to defeat, forcing Vergil and Kat to escape. As they did, the prison itself was in hunt for them, with Vergil deciding to use his new power to destroy it, but Kat warned him that it was too dangerous for him. With no options left, they combined their powers to create a vortex in Hellfire's heart which ultimately destroyed the demon, but left both Dante's and Vergil's presence recognized to the demons before dying. Days later, having developed feelings for one another during their excursion, Vergil erased both his' and Kat's memories to protect her, leaving only members of The Order who finally located and found Dante, humanity's last hope against the demons.

Retrieved from "https://devilmaycry.fandom.com/wiki/DmC:_Devil_May_Cry:_The_Chronicles_of_Vergil?oldid=87838"
Community content is available under CC-BY-SA unless otherwise noted.