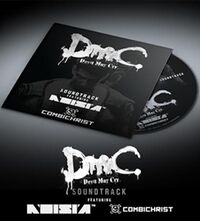 It was released on January 15th, 2013, coinciding with the game's. However, the soundtrack is not available for commercial sale, instead being a pre-order bonus for the game's Premium or Special edition from the Capcom Europe store.

Retrieved from "https://devilmaycry.fandom.com/wiki/DmC:_Devil_May_Cry_Soundtrack?oldid=92947"
Community content is available under CC-BY-SA unless otherwise noted.