Devil May Cry Wiki
Register
Don't have an account?
Sign In
Advertisement
in: Devil Arms, Guns, Weapons,
and 2 more

Devil May Cry 5
Dr. Faust is one of Dante's weapons in Devil May Cry 5, created and given to him by Nico. It is the weaponized form of a Faust.

A hat that consumes Red Orbs to launch special attacks. Earn tons of Red Orbs from foes if you don't run out of your own first.

Nico's Weapon Report - Dr. Faust
I built this here Devil Arm based off Daddy's old research. Got the name Faust from the demon I based this design concept off of.

It fires crystallized demon blood like bullets...y'know, Red Orbs? I also made sure it causes any demon it hits to cough up a butt-load of blood.

Amazing, ain't it!? You'd have to be a few beers short of a six-pack to pass up a Devil Arm like this.

Dr. Faust is built around a risk/reward mechanic, in that it uses the player's Red Orbs to power most of its attacks. The flame-edged scarf Dante wears while Dr. Faust is equipped acts as a visual representation of Dante's remaining Red Orbs, changing length to show how many he has. The more Dr. Faust is powered up, the more Red Orbs the player will both gain and expend while using it.

Its basic fire mode resembles a machine gun, with rapid fire and a fair amount of spread. This expends Red Orbs rapidly, but if fired at close range it will liberate more Orbs than it costs to fire it.

The moves "Set Hat" and "Mad Hatter" will place a hat on any enemy they strike. While wearing a hat, enemies will drop Red Orbs in a similar manner to a Red Empusa when struck with any other weapon, but will also make Dante drop Red Orbs if he takes damage from them. "Hat Trick" can be executed when the hat returns: if it is performed, all enemies given hats will be thrown directly towards Dante.

The move "Man in the Red" creates a swirling cloud of Red Orb crystals orbiting around Dante that will hit any enemies that move close to him, and can be very powerful if used properly. It is, however, quite expensive. The "finish" will fire the orbs forward, or at any enemy Dante is targeting at the time.

Magic Hat creates a ghost-like companion that will hover around and automatically target enemies with weak gunfire.

Red Hot Night is Dr. Faust's ultimate attack: at full power it summons a barrage of gigantic Red Orb meteors that will devastate both the enemy's health and the player's wallet. It takes a significant time to charge to full power, and a full charge costs 150,000 Red Orbs. If Dante is hit after the player releases the button but before the attack animation completes, the meteors will fail to appear but the Red Orbs will still be deducted.

6666 and completely replenished DT Gauge, and if 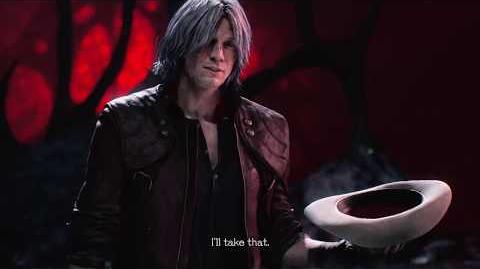 The weapon takes its name from Faust, a figure from German mythology famed for making a deal with the Devil, exchanging his soul for knowledge and worldly pleasures. The name references both Faust and Doctor Faustus, the first stage play adaptation of the legend. Dr. Faust represents a similar "deal with the Devil" in terms of trading Orbs for powerful attacks.