Devil May Cry Wiki
Register
Don't have an account?
Sign In
Advertisement
in: Guns, Weapons, Devil May Cry,
and 14 more
English

Edit
watch 02:34
Fire Emblem Warriors: Three Hopes - The Loop
Do you like this video?
Play Sound

Ebony & Ivory are Dante's trademark pair of personally customized,[1] semi-automatic pistols, designed to rapidly fire bullets instilled with his demonic power,[2][3][4] and are one of the several firearms to appear in every Devil May Cry game series. The left-handed black gun, Ebony, has been modified for long-distance targeting and comfort,[5] while the right-handed white gun, Ivory, was custom built for rapid firing and fast draw times.[6]

Ebony & Ivory are both M1911-style handguns chambered for the .45 ACP round, and boast a plethora of customized features:

In addition, several customized features are inconsistent between the various games:

The inward-facing side of each weapon's slide (Ebony's right and Ivory's left) is engraved with "Ebony & Ivory" in a cursive script along with the unique design of piano keys, further alluding to its name. The outward facing sides (Ebony's left and Ivory's right) are engraved with a dedication to Dante which is explained in Devil May Cry novel to be from Nell Goldstein:

For Tony Redgrave
By .45 Art Warks

Oddly enough, this engraving also appears on Luce & Ombra, a similar set of pistols belonging to Dante's father and used by Trish which Ebony & Ivory are modeled after.

Hideaki Itsuno has mentioned on twitter that engravings on Ebony & Ivory were wrong and in Devil May Cry 5 it has been corrected to:

For Tony Redgrave
By .45 Art Works

The model used for the Ivory within Devil May Cry 3: Dante's Awakening gameplay is simply a recolored copy of that used for the Ebony. The spent shells still behave as though the ejection port is pointed outward, appearing out of thin air above the gun and falling to Dante's right side. Dante tends to cross the guns when firing them.

On the grips of both Ebony & Ivory, a portrait of the gunsmith who made the guns, Nell Goldstein, can be found.

In most entries, Ebony and Ivory have the lowest damage output but provides the highest fire rate and mobility out of any firearm. They primarily serve to juggle enemies and extend combos if an enemy is out of melee range. Ebony and Ivory temporarily slow Dante's descent, and when used in tandem with their juggling abilities, can allow the player to reposition themselves.

In Devil May Cry, Ebony & Ivory are Dante's only ranged weapon at the start of the game. They have no moveset beyond simply firing them in the air or on the ground.

After Dante acquires Alastor, Ebony & Ivory gain the ability to fire shots charged with demonic energy while either Alastor or Ifrit is equipped as Dante's Devil Arm. Every bullet the guns fire while in Devil Trigger mode will be charged, and the player can also manually charge them by holding the shoot button for a short time until energy crackles around Dante's hands. The latter will allow a short period of firing charged shots without using the DT gauge. Charged bullets of both types take on the qualities of Dante's equipped Devil Arm, crackling with electricity for Alastor, and trailing fire for Ifrit. Force Edge and Sparda do not allow use of charged bullets of either type while they are equipped, in the latter case save during the Mundus 2 fight in the air during DT or using manual charging outside it. In this situation, the effect is similar to the fire trails of Ifrit, but color-shifted to dark red.

Charged bullets boast increased damage, improved hit-stun, knockdown and impact effects, and offer a superior boost to the Stylish Rank over normal gunfire, removing the normal "stale" cap and allowing the player to hit Stylish from gunfire alone. The downside is that the game engine tracks charged bullets as projectiles (as opposed to normal gunfire, which appears to be hitscan) and so they can more easily miss mobile enemies, particularly at long range.

In Devil May Cry 2, Ebony and Ivory can no longer be charged. This marks the first appearance of Twosome Time, where if correctly positioned, Dante will shoot Ivory in another direction if an enemy is nearby. Devil May Cry 2 also introduced Rain Storm, by shooting right after pressing the jump button, Dante will flip upside down and fire on enemies below.

In Devil May Cry 3, Ebony and Ivory are only capable of shooting on their own, however they are the only weapons that can be used during Free Ride. Using Gunslinger unleashes their full potential, allowing Dante to shoot faster and giving him access to Charge Shots, this time not expending Devil Trigger and not affecting accuracy or bullet speed. The pistols can be used to fire in two different directions, allowing the player limited control of enemy positions. (For an exploit, one can mash

alternatively, cancelling both Rapid Shot and Twosome Time at rapid succession, enabling an extremely high rate of fire). While in the air, Gunslinger grants access to Rain Storm, to rapidly fire on the enemies below. Mashing the

will cause Dante to continue Rainstorm until he reaches the ground. When standing over a downed enemy, firing repeatedly will make Dante hold the enemy down with his foot while firing Ebony and Ivory in a coup-de-grace fashion, before kicking the enemy away.

Ebony and Ivory function largely the same as they did in Devil May Cry 3. Rain Storm is slightly easier to execute, needing only to hold the Style button to extend the technique. Charge Shots can be used regardless of what Style is active, and will be fired automatically while in Devil Trigger. Twosome Time can be now cancelled into Honeycomb Fire: disposing the multi-directional attacks in favor of the increased rate of fire.

Ebony and Ivory have been upgraded to be more powerful and have a faster firing rate. Charge Shot, while still available to be used regardless of style, is now charged automatically while in Gunslinger style whenever Dante is not firing. The speed of this automatic charge increases as Gunslinger is levelled up.

In addition, Devil May Cry 5 is the first game to have mechanics acknowledging the different builds of the two guns. This only occurs in Gunslinger mode: while in this mode, pressing the normal shoot button will fire three-round bursts from Ivory, while the Style button fires high-powered single shots from Ebony which have a strong stagger effect on enemies. When charged, Ivory's shots will pierce through multiple enemies, while Ebony's bullets will explode on impact.

Entering Twosome Time is done by pressing one gun's fire button and the other quickly, then repeatedly pressing the second button. Dante will fire the first gun straight ahead, while the movement stick can be used to aim the other in the four cardinal directions. Honeycomb Fire is no longer tied to Twosome Time, instead performed by a back-to-forward input.

Rainstorm has been reworked: the player can now control Dante's descent rather than the move only going straight down. At the beginning of the animation, Dante shoots outwards, then brings his guns together to shoot directly below him. The animation stops at just about Dante's standing height. Due to the longer start-up and earlier end to the animation, Rainstorm is better initiated further from the ground.

Dante uses Ebony & Ivory for three special attacks. The first "E & I" deals up to four light physical hits on a single target. The second "Bullet-Time" (renamed to "Twosome Time" in the HD Remaster) deals moderate physical damage to all enemies and cannot be dodged. The last "Showtime" shows Dante using Rain Storm in the middle of a combo; the combo as a whole deals a large amount of Almighty damage to all enemies.

Dante can use Ebony & Ivory as his crouching light attack (depending on the side he is facing), and can also perform Charged Shots/Twosome Time, Wild Stomp, also called Cold Shower, and Rain Storm, as well as fire them during his ground throws. His new Weasel Shot special, in which Dante leaps backward while firing, and his Million Dollars Hyper Combo, in which Dante fires a volley of bullets, then fires two charged shots in the style he used to finish off Mundus in DMC while saying "Jackpot", are newly introduced moves outside the original series.

Dante uses the Ebony & Ivory during the passive skill "Rapid Shot", this skill increases his Phys hit rate by +20%. It changes the Regular Attacks to the following: Inflicts Phys damage 5 times (Power: 20) on a single target with a 25% Crit Rate, then enters a state of Might. During this state, Million Stab will have Phys Pierce that ignores physical immunities.

Dante uses the Ebony & Ivory during his "Ebony & Ivory" Hero Art. This Hero Art enables all friendly units to trigger Resonate twice when an Action Card is used.

The Ebony and Ivory are named after the song of the same name composed by Paul McCartney and Stevie Wonder, which references the black and white construction of piano keys.[7] 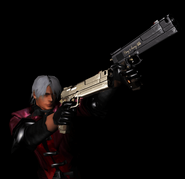