The Elder Geryon Knight is the demonic knight Cavaliere Angelo riding an Elder Geryon, a type of demonic horse capable of localized control of time. The Elder Geryon resembles an enormous armored horse with glowing blue horns and a mane of blue flame.

V crosses paths with Cavaliere Angelo during Mission 5 after getting out of the underground of the shipyard. He eavesdrops on the knight speaking with Malphas who is the second-in-command of Urizen.

Nico's Enemy Report - Elder Geryon Knight
Geryon are listed as "equus daemonicus" in some of the oldest demonology texts. That's "horse demon" to the uneducated. You keeping up okay, sugar?

Anyway, seems these demons come in all shapes and sizes, but the one thing they have in common is the power to mess with time.

They're also proud—this is not a horse you just jump onto and ride around.

So if V's tellin' the truth, the way that knight was able to ride this Geryon is some mighty impressive stuff.

The Elder Geryon Knight was added to TEPPEN with its "The Devils Awaken" expansion. He is featured in one unit card. 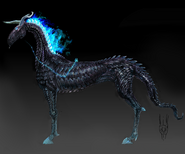 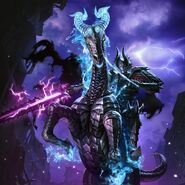 Retrieved from "https://devilmaycry.fandom.com/wiki/Elder_Geryon_Knight?oldid=106697"
Community content is available under CC-BY-SA unless otherwise noted.