Yoshihiko Wada (voice)[1]
Empusas are lesser demons that appear in Devil May Cry 5.They are the lowest among their species, being insectoid workers with a symbiotic relationship to the Qliphoth tree.

Empusa are creatures that resemble ants, with a small abdomen that swells up and turns red if they are able to feed, and a large head equipped with pincers. On closer inspection, however, they have three distinct human faces, two fleshy and with glowing eyes, either side of a central face with hollow eye sockets and an exposed jaw with sharp teeth that is incorporated into the creature's mandibles. What appear to be vestigial human hands can be seen on their forelimbs, and feet on their rear limbs. They also possess a tiny pair of functionless feathered wings on their back.

Whether they are humans transformed by the Qliphoth in some manner or just demons that look like they were once human is not clear.

Empusa are worker creatures and not particularly capable of combat: they are slow, weak, and only attack sporadically. If left alone, they will seek out any deposits of blood on the ground and drain them, filling their abdomen. In this state they will often attempt to escape from combat entirely to return the blood to the Qliphoth, tunneling into even the hardest ground and slipping away.

Nico's Enemy Report - Empusa
Seems you'll be running into a lot of these ugly suckers-and I mean "suckers" literally!

The good folks of Red Grave have had their blood sucked dry by these lil' worker ants. Once the creatures have a butt full of the red stuff, they carry it off to the Qliphoth

Well, on the plus side, they are pretty dumb-they might even ignore you and keep working until you turn on the heat. Be careful, though. Worker ants don't seem so weak when you're being swarmed by 'em

Empusa are the most basic enemy in the game and present little threat, scuttling around erratically and only attacking occasionally: true to Nico's report, they will sometimes simply ignore the player character if not disturbed. They attack with a sequence of weak claw swipes or a slightly more powerful attack where they rear up and slam the ground with both claws. They lack any projectile attack or anti-air move, and so are only a threat on the ground at close range.

They have little health and are only really dangerous to the player's style rank: when encountering a large number of them, it is important not to lose track of any of the creatures.

If they are left alone and able to feed on blood in the environment, their abdomen will swell up and turn red. In this state, if left alone, they will attempt to tunnel away after a while in a similar manner to a Red Empusa. The principle danger, however, is if an Empusa Queen gets hold of them in this state, as this will allow the Queen to enter its own powered-up state.

The Empusa first appeared in TEPPEN with its "The Devils Awaken" expansion. It is featured in one unit card and one action card. It also appeared in an official illustration made to promote said expansion.

In the "Haunted by Memories" expansion, there is a card where V is seen killing an Empusa.

Empusa (Ἔμπουσα) are female spirits in ancient Greek legend with the power to change shape, which they would use to seduce young men before drinking their blood and consuming their flesh.

Promotional illustration for "The Devils Awaken" expansion in TEPPEN 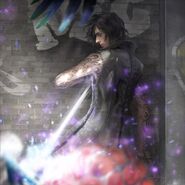