Devil May Cry 5
Empusa Queens are powerful lesser demons that appear in Devil May Cry 5. They are the most powerful variation of the Empusa, vile creatures that gather blood for the Qliphoth.

A massive insectoid creature resembling a praying mantis. It walks on all four legs most of the time, only rearing up to strike with its claws. The front of the head is a fully exposed human skull with two partial faces either side of it, with the skull framed by large mandibles. A "crown" of structures resembling purple Blood Clots forms the remainder of the head.

The Queen is fairly slow in its basic state, attacking sporadically but suddenly which makes it hard to predict. It can perform multiple strikes with its forelimbs, a single heavy strike, a jumping attack to re-position itself which does damage on landing, or a grapple attack which will result in the Queen feeding on the player character if it hits. This grab can be escaped by activating Devil Trigger or using Nero's Breakaway move.

It is overall somewhat similar in its abilities to Phantom or a Kyklops, though it lacks a projectile attack.

Like it's offspring, the Empusa Queen can feed on blood to enter a "red" state. For the Queen, this is more like a Devil Trigger: it becomes tougher, extremely resilient to knockback, and attacks more quickly and more persistently. The Queen can enter this state by feeding on blood present in the environment, other enemies, or from the player character failing to escape it's grab attack. Sometimes Queens simply spawn in their red state.

I knew it! Where there's worker ants, there's gotta be a queen too.

This big gal's got the armor to take a beating and the tools to dish one out. And when she's angry, she ain't picky about her targets- she'll scythe through her own demon buddies to get to you.

If that ain't enough, she'll get fired up if she sucks enough blood. Watch out if her body turns red- that's your sign that it's go time.

The Empusa Queen is effectively a miniboss and is usually fought with support from other enemies. The Queen's physical size and use of sweeping attacks is the main threat, and it is very important to keep track of where the Queen is and what it is doing to avoid heavy damage.

As Nico's description indicates, the Queen does not discriminate in what it attacks: it's slashes will deal damage to other enemies, and it will deliberately kill any Empusa with a full abdomen that approaches it too closely in order to enter it's powered-up state.

Queens usually guard against Nero's Buster moves, and must be in a stunned state for the move to succeed.

The Empusa Queen first appeared in TEPPEN with its "The Devils Awaken" expansion. It is featured in one unit card. 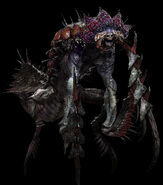 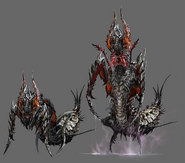