Devil May Cry 2
Devil May Cry 5: Before the Nightmare (Mentioned)
Furiataurus (Lat: "Fury of the Bull") is a boss that appears in Devil May Cry 2. It is encountered as the boss of Mission 8 of Dante's scenario.

It wields a massive hammer, and its body is made of hardened lava and flame in the shape of a minotaur, as it is still haunted by the death, agony, and resentment of the damned.[1]

As Arius boards his helicopter on the off-shore oil rig's helicopter pad, Dante arrives to stop him. Arius summons Furiataurus, and manages to escape while Dante fights the beast. However, Dante manages to slay it, and its body hardens into an inert statue. It is later revived as a component of Argosax the Chaos.

The best way to defeat Furiataurus is with your firearms. If you get too close it can push you back with flames, but if you stray too far away it will charge at you head-on.

The Furiataurus was first added to TEPPEN via its "The Force Seekers" expansion. It's featured in one red unit card.

The Minotaur, whom Furiataurus is based on, is also featured in The Divine Comedy, where it is seen in the Seventh Circle of Hell: Violence. The Minotaur is shown amongst those who were damned for their violent ways in life.

The inspiration for the design was based on woodcuts of the brazen bull[2] - an alleged torture, or execution device, it was an bronze oven in the shape of a bull. The victim would be placed inside the oven, and slowly roasted alive as the metal began to heat up. 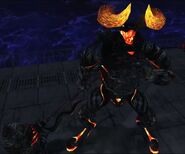 As seen in the HD collection. 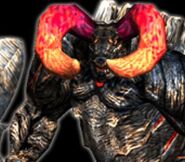 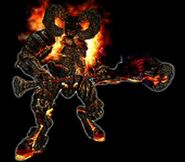