Gerbera is one of the Devil Breakers in Devil May Cry 5.

Gerbera is a green and black Devil Breaker arm with a forearm made of diagonal slat segments. An emitter is present in the palm of the hand, which closes up when not in use. When in its fully deployed state, the forearm unfolds into a circular focusing array.

Gerbera GP01 is a red and white Devil Breaker arm with a forearm made of diagonal slat segments. An emitter is present in the palm of the hand, which closes up when not in use. When in its fully deployed state, the forearm unfolds into a circular focusing array.

A Devil Breaker that launchers shockwaves from its petal-shaped complex reverberatory furnace. The recoil can be used for instantaneous movement, and converging the shockwaves makes it fire a high-output energy beam. Beautiful design belies tremendous firepower.

I thought up this beauty while gazing at a bed of flowers— African daisies, to be precise. What? Can't a girl have a little grace in her gear box!?

The petal-shaped parts act as a complex reverberatory furnace. That furnace generates an intense heat that can be shot out as a shockwave.

And that shockwave ain't no one- trick pony, lemme tell ya. Attack, defense, even movement—this baby can do it all!

This bad boy's something else. I upgraded the Gerbera at the request of another legendary artisan, Kawamori.

This guy has a flair for flash, let me tell ya. The color scheme was all his idea.

Something like this doesn't come along every day. You best treat it with respect.

Gerbera is unlocked by default, but can only be equipped after the store becomes available at the start of Mission 02: Qliphoth. Following this, Gerberas will spawn randomly in missions along with other Devil Breakers, and can be purchased in the store for 500

. Gerbera GP01 is only available if the player has purchased the relevant DLC: if so, it can spawn as early as Mission 01: Nero. It also costs 500

Gerbera's Jocky makes it the ideal Devil Breaker for defense and agility. Jocky has two distinct functions: the first is a "palm blast" like a smaller and weaker version of Overture's normal attack, which is performed by pressing the Devil Breaker button with the movement stick neutral. This is weaker than Overture's attack, but can still negate attacks, break enemy guards and knock enemies down.

With the analog stick tilted in a direction, the blast will instead propel Nero diagonally upwards in that direction. This counts as an attack, with Nero able to scatter weak enemies by blasting into them. On the ground it will propel Nero into the air. There is a short pause between uses, but Gerbera is not subject to the usual "one air move per jump" limitation, and with proper timing can be used to extend a jump more or less infinitely without losing height.

Gerbera's ground-based Break Age, Stamen Ray, fires a powerful continuous laser beam that deals constant damage. While firing, gameplay changes to an over-the-shoulder view, allowing the player to manually aim for the duration of the blast: this is controlled with the movement stick, and the control is not affected by inverting the vertical camera controls. Nero, however, is stationary during this attack so it is best used when there are no enemies behind him. Gerbera's mid-air Break Age, Petal Ray, fires many ricocheting lasers that bounce multiple times and is most effective in smaller spaces.

The GP01 version differs a little in how it handles: specifically, when used with the movement stick neutral, GP01 will instead propel Nero into the air vertically if he is on the ground, or down to the ground if he is in the air. The ground move will pull lighter enemies up into the air. The functionality with the stick tilted and Break Age moves are identical. Like all DLC weapons, it cannot be equipped in Bloody Palace mode.

The Gerbera was added to TEPPEN with its "The Devils Awaken" expansion. It is featured in one action card. The illustration for this card is based on an official promotional image released for Devil may Cry 5 which can be seen below. 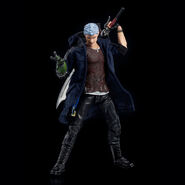 The Gerbera on Nero's Sentinel's figure