Edit
watch 02:17
New Pokemon Games - The Loop
Do you like this video?
Play Sound
This article is about the Devil Arm in Devil May Cry 4. You may be looking for the boss of the same name in Devil May Cry 5.

Devil May Cry 4
Gilgamesh is a set of gauntlets, greaves, mask, and back armor which appears in Devil May Cry 4. It is obtained by Dante from Echidna's Hell Gate, which it was used to power. Like similar weapons appearing in previous games, Gilgamesh focuses on slow but powerful attacks.

Gilgamesh is an armor-like weapon made of a devilish metal which absorbs organic material and transforms it to steel,[1] and its techniques can be powered up by engaging the thrusters on the gauntlets and greaves. The gauntlets have small drills on each arm capable of extending during some attacks, while the greaves have small saws allowing Dante to cut through enemies with kicks. Whenever Dante is charging an attack, the mask covers his face, but its real function is never specified (though it seems to be implied that it prevents the user from breathing the gas which comes out of the thrusters during the charging process). Similar to the mask, the back armor, which resembles a pair of small metallic wings, doesn't seem to serve a real purpose during gameplay.

Library - Arms - Dante's Arms
GILGAMESH
Made of devilish metal that absorbs organic metal and transforms it to steel, this weapon will shock and awe enemies with brute force.

The Gilgamesh is obtained at the end of Mission 13: The Devil Returns, after defeating Echidna.

Gilgamesh is fundamentally a revision of the gauntlets in past games, sharing many of the same techniques and focusing on the same slow but hard-hitting combos. Almost all of its attacks can be charged, and offer significant damage with every hit. The Gilgamesh has two levels of charge, and when fully charged, the attacks are utterly devastating; a fully-powered, Devil Triggered Dash Straight can kill a Scarecrow (Leg) in a single hit, and a Devil Triggered Real Impact can even kill almost all lesser demons except for the Blitz. Both normal and Devil Triggered charged attacks can be "Just Charged" by releasing the charge button the instant the Gilgamesh flashes. This drastically increases the strength and Stylish Rank of the technique, as well as slightly modifying the technique animation.

If you are able to block or dodge a Mephisto's finger attack (Royalguard Style would help), then hit it with Gilgamesh, Dante will have a unique animation where he kicks away the finger, leaving the Mephisto staggered for a little while, making it extremely vulnerable and open to damage. This is the only known move in the game to not appear on any tutorial.

The jump-attack variant, Flush, can also easily execute the Jump Canceling trick, especially on the Mephisto and Faust.

Note: Although the move "Shocking!" sets Dante in a charging stance, "Shocking!" cannot be charged regardless of hang time. Same goes to similar Beowulf's move Volcano.

The Gilgamesh appears in Ken's Dante costume in the game, it can be used by inputting the alternate code.

Gilgamesh was a quasi-historical king who is the central character of the Epic of Gilgamesh. He was a demigod of superhuman strength who became bored with his rule, and went on an adventure in which he became friends with the half-wild Enkidu and ended up seeking a method of immortality to prevent his own death.

The attacks "Full House", "Straight", "Draw", and "Flush" are references to Poker. 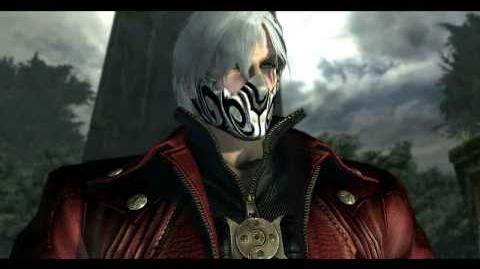