Start a Wiki
watch 02:17
The Loop (Games)
Do you like this video?
This article is about the boss in Devil May Cry 5. You may be looking for the Devil Arm of the same name in Devil May Cry 4.

Gilgamesh is one of the bosses in Devil May Cry 5 that Nero has to face in Mission 6. A fragment of Gilgamesh is later used by Nico to make the Devil Breaker Rawhide.

Gilgamesh is a titanic demon, similar to an insect, with four legs and an elongated body similar to a cockroach, though with disproportionately long legs. It has two tendrils which extend from its sides which it uses to create lightning like blasts.

It is not in fact a demon from the underworld in its own right, but roots of the Qliphoth encased in the supernatural metal from which it derives its name.

Gilgamesh is first encountered by V after he slays Nidhogg. V initially intends to avoid Gilgamesh as he lacks the strength to face the behemoth head on, but it notices him and opens fire. Gilgamesh's energy blasts destroy the ground under V's feet, sending him into the sewers. He eventually arrives at the bottom of a shipyard, Gilgamesh still pursuing him as it smashes its legs through the ceiling in an attempt to crush him.

Around this time, Nero sees Gilgamesh heading through the shipyards and decides to attack the demon, deeming it too dangerous to be left wandering. Through collaborative efforts with V, Nero defeats the demon. A recovered chunk of metal from the creature is then used by Nico to fabricate a new Devil Breaker.

Gilgamesh is a kind of metal that can be mined from the bedrock of the underworld. Fuse it with demon flesh, and you've got armor harder than steel.

That's what we got here. Seems somebody decided to fuse the roots of the Qliphoth with a batch of Gilgamesh, and before you know it there's a three-story metal demon walkin' around.

The really rad thing about Gilgamesh is that it can create shockwaves outta thin air. That's how this varmint was blowin' things up from a distance—and it means runnin' don't do you no good.

If you want to kill somethin' like this, you gotta get up close 'n' personal.

Main article: Mission 6: Steel Impact
The fight is fairly straight forward on Human and Devil Hunter difficulties. Attacking the nodes on Gilgamesh's legs will allow Nero to use them as anchor points to launch onto its back. Once there, attack its main node to do damage. After some damage is done, the node will retract and Gilgamesh's back will begin to bubble as the demon tilts. With some maneuvering and careful timing, the player can jump to avoid the spikes the come up from the bubbling sections and land back on Gilgamesh to continue the attack when its core is revealed. Should this tactic fail, simply repeat the process to get onto Gilgamesh's back.

Gilgamesh will launch lightning blasts from its tendrils throughout the battle, but these are really only a problem when attacking the central node. Use of the Gerbera Devil Breaker will allow the player to repel or dodge these attacks as they see fit, but failing that, moving behind the node can prove effective at avoiding the fire.

The Gilgamesh does not have a card of its own, instead it is featured in the background of one of Nero's cards (No. NERO 013). 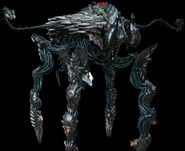 Gilgamesh in TEPPEN
Add a photo to this gallery
Retrieved from "https://devilmaycry.fandom.com/wiki/Gilgamesh_(demon)?oldid=106695"
Community content is available under CC-BY-SA unless otherwise noted.