Devil May Cry 5
Green Empusas are lesser demons that appear in Devil May Cry 5. Second variation of the Empusa. They have the power to heal other demons.

The Green Empusa is of similar overall build to other normal Empusa, but is significantly smaller, with a more slender body, greatly enlarged wings, an oversized abdomen and large compound eyes: the overall appearance is of a fly.

Green Empusa tend to try to keep away from combat and will often retreat from player characters, preferring to attack at range or heal enemies not immediately engaged in combat. If they have used their healing ability, they tend to prioritize replenishing it.

Nico's Note - The Art of Devil May Cry 5
One thing about these Green Empusa: They are like the underworld's version of goddamned cockroaches! Only difference bein' that these stringy somebitches'd just soon chomp down on your leg. I don't need a sword or a gun - I'd just as soon run these mother suckers over to hear 'em pop.

If you thought those other bugs were bad, you're really gonna hate these guys.

The green stuff in their butt ain't any kind of blood-it's a healing nectar that'll fix up other demons' wounds in no time at all.

My recommendation: Kill these first, before they make themselves a nuisance.

Oh, and it looks like they spit some kinda poison juice too. So, uh, maybe bring an umbrella.

The Green Empusa is largely a support unit, with its main ability being an AoE heal that restores the health of any enemy in its radius of effect. The Green Empusa will telegraph this by hovering over the enemy it intends to heal, with a sparkling green pollen-like effect appearing right before they begin their heal. They seem to prioritize healing the most powerful enemies in the current combat area.

Once they use this ability, the Green Empusa can "reload" themselves if they find blood deposits in the combat area: after sucking up one of these, they will regain their green glow and be capable of healing again. If they have their green glow, they will drop Green Orbs when they are defeated.

Aside from healing, the Green Empusa has a weak melee attack performed with a double-swing of its forelimbs, which is so clumsy it can often miss a completely stationary player character, or a longer-ranged projectile attack that is lobbed in an arc.

As a healing unit, they can either be prioritized in order to prevent them from healing enemies, or left alone in the hope of building up the combo score by prolonging a battle. In the latter case it is necessary to keep an eye on them to avoid being taken by surprise by their projectile attack.

Their small size and skittishness means they are tricky to target with melee attacks, and better engaged with firearms. Nero's Wire Snatch and Dante's Trickster Style Air Trick are good ways to get close to them quickly. 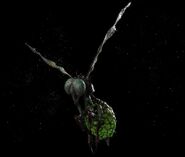 Retrieved from "https://devilmaycry.fandom.com/wiki/Green_Empusa?oldid=115770"
Community content is available under CC-BY-SA unless otherwise noted.