Hell Antenoras are Hell Cainas who have been tortured extensively to the brink of insanity and given two massive cleavers. However, most of their features are hidden underneath a large hood, with their only visible deformity being their hunchback appearance.

Hell Antenoras have no ranged attacks and will only attack using their two cleavers. Being knocked down will cause them to get up quickly and enter a berserk state in which their bodies glow purple. During this state, their attacks are much harder to interrupt, and become much faster. However, when they're lying face down on the ground, they're defenseless.

They are not particularly fussy about what they attack, and will cleave through other demons if they are in the way, particularly in their berserk state. If they are hit by another enemy's attack, they will deliberately attack the enemy that struck them. They also appear to consider Behemoths and Empusa Queens as just as much of a threat as the player character, and will target a Behemoth or a Queen if it is closer to them.

Nico's Enemy Report - Hell Antenora
Take a Hell Caina, torture it till it goes mad, throw weapons in its hands, and this is what you get.

Their hatchets are real nasty, and they're nimbler than they look. Expect quick attacks when they go into a frenzy.

Judging by the samples we got, these things are extremely susceptible to pain—so you better believe they won't take any punishment lying down.

Knock 'em down, but keep your guard up. Next thing you know it'll be back swinging like a madman on fire.

Hell Antenoras only become a major threat when they are knocked down and enter their berserk state. While in this state, indicated by purple tubes on their body, they gain so-called "super armor:" they cannot be staggered or knocked down by normal attacks. Nero's Buster Arm or Buster can still interrupt their berserk mode, and they can also still be parried with a well-timed sword strike: Shuffle is particularly suited to this due to its invincible frames.

Their ability to attack targets in the air is limited and they cannot switch to an anti-air move if they have already started one of their berserk ground lunges, so getting up high makes the player character largely safe from their powerful counter-attacks.

When facing them as Dante, it is a very bad idea to enter Devil Trigger in Gunslinger mode with Devil Sword Dante in Dante's weapon list, as the barrage of swords will keep Hell Antenoras in a constant berserk state. Balrog's Light Blow and Break Spiral, as well as King Cerberus's Revolver and Ice Age are well-suited to countering their attacks. Their charges are highly telegraphed, making Royalguard Style an effective counter to them.

V needs to rely on Shadow's standard combos to counter the attacks, as the strikes come out fast enough to clash with the cleavers. Arbiter into Bayonet is a viable tactic, as it keeps Antenoras in the air long enough to deal serious damage. The player should avoid using Griffon's Flank Attack, as it will knock the enemy down and make them charge while doing very little damage.

The Hell Antenora first appeared in TEPPEN with its "The Devils Awaken" expansion. It is featured in one unit card. Its effect is similar to its behavior Devil May Cry 5, when taking damage, the Hell Antenora will deal damage equivalent to the attack taken to a random enemy unit. 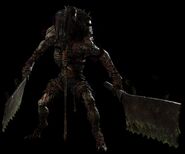 TEPPEN card
Add a photo to this gallery

Retrieved from "https://devilmaycry.fandom.com/wiki/Hell_Antenora?oldid=100198"
Community content is available under CC-BY-SA unless otherwise noted.