Devil May Cry Wiki
Register
Don't have an account?
Sign In
Advertisement
in: Articles in need of translation, Article stubs, Lesser demons,
and 3 more
English

Hell Judeccas are tall, thin demons with a skeletal appearance surrounded by filament like purple energy protecting them to an extent (similar to Hell Antenora in berserk state). They are related to Hell Caïna and Hell Antenora and can summon them both in combat. They are the strongest of the 3 Hells.

They have two scythes for hands that they can use for attack and defense, and they can teleport.

A high priest in the choirs o' Hell. Ain't that somethin'?

These fellas tend to leave close-quarters fighting to the grunts, which they can summon in to take the heat off themselves. Meanwhile, they attack from long range by extending those snakey tentacle arms.

They'll try to keep their distance and dodge gunfire when they can. You'll just have to show these slitherin' scumbags you got the smarts to get past their defenses and send 'em screaming back to the pit.

Hell Judecca's main ability is to summon Hell Caina and Hell Antenora to back it up. Because of this, it's advised to always defeat it first. Its attacks are all rather slow and telegraphed, leaving the player much room for counter. However, it also possesses Hyper Armor, allowing it to endure some attacks without flinching and interrupt your combos, most of its attacks cannot be countered, except by Dante's Royalguard Style. The Hell Judecca will teleport to keep itself in the player's sight and to get away when knocked down or stuck in a combo.

For Dante, it's advised to first stun the Hell Judecca, which will temporarily prevent it from countering and teleporting. One method for this is to use King Cerberus' Percussion, which will instantly stun it. Afterwards, hit it with 10 Light Blows from Balrog's Blow Mode to activate Ignition and finish it of by using Real Impact.

For Nero, the Hell Judecca's Hyper Armor makes Buster and the Buster Arm ineffective. To make these moves work, the demon's hyper armor must be broken in order to make it flinch, which can be done by hitting it two times. Using Buster will also stun it, giving the player an opening to hit it a few more times. The player can then Buster the Hell Judecca again and start over the whole combo.

For Vergil, it is easier to stun it with multiple strikes from Mirage Edge before going all out. Doing multiple Judgment Cuts can also stop it from performing an incoming attack.

The Hell Judecca first appeared in TEPPEN with its "Ace vs. The People" expansion. It is featured in two black cards. 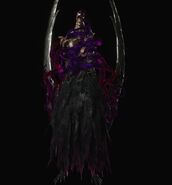 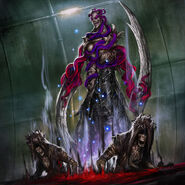 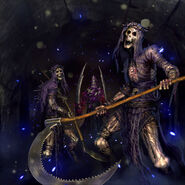