Helter Skelter is one of the Devil Breakers that Nero can equip in Devil May Cry 5.

Nico creates Helter Skelter at the same time as Punch Line after Nero defeats the demon Goliath, though it is not clear if there is a direct connection between the Goliath fragment and Helter Skelter's construction as there is with Punch Line.

Helter Skelter is a tapered gold spiral with a three-pronged claw hand at the tip. When in use, it unfolds into a series of vicious curved blades mounted to a central spindle via assemblies resembling propellors.

There was this weird slide in the park near my house when I was a kid, see? That's where I got the inspiration for this design.

The simple design concentrates all the power into the tip to really drill the point home to your enemies. It has a kind of beautiful precision, don't you think?

I made sure it's able to grab stuff, but just barely...in all honesty, I kinda want to take out that function. Really streamline the thing, y'know?

Helter Skelter is unlocked at the start of Mission 03: Flying Hunter along with Punch Line. Following this, Helter Skelters will spawn randomly in missions along with other Devil Breakers, and can be purchased in the store for 1000

Helter Skelter's primary attack is a piercing drill thrust which can break an enemy's guard, and since it attacks rapidly will often also parry any counter-move they make as a result of being attacked while guarding. If it does not contact an enemy, the attack will just be a small arm-thrust that does nothing. If it does hit something, however, the attack will be extended to deal multiple hits. During this time the player can repeatedly hit the Devil Breaker button to trigger up to two additional drill attacks with the blades further opened out each time, functioning like a Crazy Combo. This can also be performed in the air, and will cause Nero and the enemy to hover until the move completes.

It is largely a single-target weapon, and the large investment of time required to inflict all three hits leaves Nero vulnerable to being attacked from the sides or rear.

The Break Age move throws all of the weapon's power into flying charge move which propels Nero straight forward and then arcs up into the air, damaging all enemies around him regardless of whether or not they try to block it. It can also disregard the "super armor" state of enemies such as the Hell Antenora, hitting them as if they were in their normal state.

"A Devil Breaker with a banana motif. Who knows what possessed Nico to build this? The bunch rotates, but is mostly useless."
―Monkey Business' in-game description.

Monkey Business (モンキービジネス, Monkey Business?) is a model swap of Helter Skelter, and shares its same movesets, though unique particle effects appear while it is hitting an enemy. It cannot be bought from Nico or Divinity Statues, and must be found within the Missions.[2] Unlike the other DLC Devil Breakers, it has no move descriptions in the pause menu or gallery.

On release, Monkey Business could only be unlocked by redeeming a download code which came with copies bought from Amazon.co.jp.[3] Some codes were also given out for free for random users on Xbox One. On May 7, 2019 it became available as a free DLC for all regions and platforms.[4] 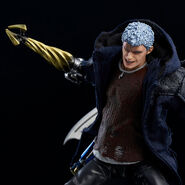 Retrieved from "https://devilmaycry.fandom.com/wiki/Helter_Skelter?oldid=108789"
Community content is available under CC-BY-SA unless otherwise noted.