Devil May Cry Wiki
Register
Don't have an account?
Sign In
Advertisement
in: Devil Arms, Weapons, Devil May Cry,
and 2 more
English

Devil May Cry
Devil May Cry Drama CD Vol.1
“
My name is Ifrit. The fool who awakens me shall pay dearly with fires of hell.
”
—Ifrit, Devil May Cry

Ifrit is a gauntlet Devil Arm that appears in Devil May Cry. The weapon carries the spirit of a fire-elemental demon and its attacks are charged with magical hellfire, far more intense than any natural source of flame.[1] Like Alastor, Ifrit can only be wielded by one strong enough to resist its demonic nature.

Ifrit consists of a pair of incandescent gloves resembling those of a suit of medieval European plate armor. Around the glove is a large dark metal dragon head with the glove between its open jaws as if it is a flame the dragon is breathing. Along the top of the dragon's head are numerous spikes that glow in the same way as the glove, and this glow is also present on the dragon head's teeth and eyes.

Dante finds Ifrit on an altar in the Garden, and he hears its voice declaring that he will pay with the "fires of hell" for awakening it. It flies through the air and shackles his arms, trying to pull them apart, but Dante is able to subdue it.

After that point, Dante can channel Ifrit's power, enhancing his attacks with fire and allowing him to take the form of a horned, spiked demon.

Ifrit is the slowest melee weapon in Devil May Cry and has the shortest range, but it also has the highest damage output with the exception of Devil Trigger Sparda. Its fire elemental attacks make it far more effective than Alastor against Plasmas and even more so against Frosts. Its basic combo string and Magma Drive can be charged to increase their damage output: the player can release the melee button at any time to unleash the hit, or it will be automatically occur when fully charged after about two seconds. At full charge, hits from Ifrit will break through the block animations of many enemies. While being charged, Ifrit's attacks will pause the reset time of the Stylish Rank. Ifrit's basic attack string is a sequence of two punches and then two kicks (often referred to as "PPKK" in strategy guides), and it does not have any pause combo variants.

Its equivalents to Stinger and High Time, Kick 13 and Magma Drive, both need to be purchased: Kick 13 has much more limited range than Stinger and is more notable for its extremely high speed, making it very good as a quick close-range counter-move. These moves can be inserted into the standard PPKK combo as "finishers" at any time. There is also an animation cancelling exploit associated with these moves, wherein if the input for either them is done quickly enough after starting the third hit of the PPKK combo, it will cancel the recovery frames of the kick without the Magma Drive or Kick 13 actually happening, allowing the player to instantly start the PPKK combo again. Kick 13 and Magma Drive after the first punch of the basic combo are performed with right leg and left hand respectively.

Ifrit's attack in the air is a diagonal kick which can travel a surprisingly long distance and is easily the best move Ifrit has for moving between enemies quickly. Rolling Blaze is a unique movement-based technique that covers Dante in flames while he is jumping. This can serve as both an offensive and defensive maneuver, and its long duration means it is very useful for parrying attacks or destroying projectiles. Ifrit does not, however, have Air Hike, and so is inferior to Alastor for overall aerial mobility.

Ifrit's attacks in Devil Trigger mode grant the weapon a varied suite of capabilities once they are purchased. For Ifrit, DT only increases damage output: it does not have the movement speed or animation speed increases that are gained when using Devil Trigger with Alastor.

Kick 13 has an undocumented ability in DT, becoming a fast, multi-hit automatic combo that pushes Dante forward, cannot be parried, and is very good for breaking through the guard of enemies who can block multiple hits such as Nelo Angelo. Meteor provides Ifrit with a projectile attack which slightly increases DT drain for each use: the fireball that is formed is about as fast as a round from the Grenadegun and can miss a fast-moving enemy, but is very powerful, and can be charged for more power when Meteor 2 is purchased. It can pierce through multiple enemies if they are lined up. Because Meteor and Magma Drive both use the same command input, if the player has purchased Meteor the only ways to perform a Devil Triggered Magma Drive are to either start charging Magma Drive outside DT and then activate it, or do a Magma Drive immediately after the first or second punch of the basic combo (since Meteor cannot replace the second or third hit of the PPKK combo in the way Magma Drive does).

Ifrit's ultimate attack is Inferno, the most expensive skill in the game. Inferno is triggered in mid-air, and has Dante drop to the ground with a fist slam, creating a circular area of flames. Each flame effect deals damage individually, and the large number of individual hits deals very high damage, enough to kill many low and mid level enemies instantly. However, each Inferno deducts 3 runes from the DT gauge. Inferno can still be performed if there are less than 3 runes remaining: if this is done, DT will end when the animation for Inferno concludes.

Ifrit has an undocumented interaction with Nightmare-β: while the latter is equipped, outside of Devil Trigger the damage of all punches with Dante's left hand will be doubled.

If Sanada Yukimura (Scorpio in Devil Kings) is equipped with Sparda, Ifrit will appear as arm guards.

Most characters can perform the Ifrit Combo. In the same game, Dante yells "Inferno!" while performing the Sparda Kick.

Ifrit, just like Alastor, is a part of the "Dante's Devil Sword" weapon set. It can be used to deal a bit of fire damage to the monsters.

In Middle-Eastern folklore and the Qur'an, Ifrit are either regarded as a class of powerful djinn or as death-spirits seeking revenge on their murderers. The depiction of Ifrit as a fire-elemental draws from Ottoman Turkish descriptions. 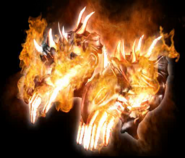 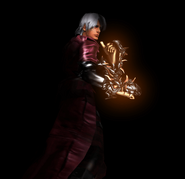 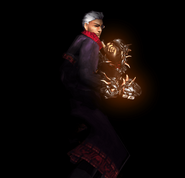