Devil May Cry 2
Infestants are insectoid parasitic demons that appear in Devil May Cry 2, with the ability to merge with and control machinery. They first appear in Mission 5 of Dante's scenario and Mission 4 of Lucia's scenario.

In their normal form they appear as large, spindly insects that scuttle towards and then lunge at their enemies. Infestants are able to merge with and control a number of different mechanical "hosts." During the incident on Vie de Marli they take over a number of military vehicles of unclear origin, but they are apparently also capable of merging with demons.

Machines merged with Infestants become coated in organic growths, with the main feature a single giant eyeball. Their durability is significantly increased by the growth, which acts as an additional layer of armor.

Parasitic creature that has the ability to merge into demons and inanimate beings like machines.

A tank possessed by an Infestant. The body coated by the demon armor is invulnerable to any attack.

A helicopter possessed by an Infestant. Destroying the Infestant is the only way to destroy this entity.

Infestants that have not merged with technology only appear in the main game a couple of times: they sometimes appear at the very start of Dante's Mission 6 in the street before the battle with Nefasturris, and always appear in Lucia's campaign in Mission 4 in the underpass where she acquires the Offence Heart. They can also be encountered in Secret Missions and the Bloody Palace.

They are are more of a nuisance than a threat: they have the ability to become partially invisible, but their only attack is to lunge at the player character and cling to them, draining health while they are attached. They can be shaken off by either wiggling the left stick or activating Devil Trigger.

They have the following attacks:

Thankfully, their enemy file is incorrect and their armor is not invulnerable, only granting them very high durability. They are formidable foes at long range since their cannon fire is very accurate and can knock characters back a long distance, but they have no attacks that are effective against an opponent at close range who does not jump on top of them. While they can move, they very rarely do so: even if they do, they will generally either just rotate their hull on the spot or only move a very short distance. They cannot deal damage by running the player character over, so there is no need to watch out for them moving.

Defeating them is largely an exercise in patience rather than skill once the initial approach to them has succeeded, though Dante's confrontation is a little riskier due to their aforementioned ability to shoot through each other. Attacking the roof of the turret deals significantly more damage than hitting the side of the vehicle, though this is dangerous as it exposes the player character to fire from their machine gun.

Infested Chopper is an Infestant-controlled attack helicopter encountered throughout the latter half of Dante's Mission 5, and can also be encountered in the Bloody Palace on boss floors. It is armed with a chin-mounted chaingun, Hydra 70 unguided rocket pods and a pair of AGM-65 Maverick air-to-surface guided missiles which regenerate on their launch rails after being fired.

The boss sequence with Infested Chopper takes the form of a series of chase sequences linking encounters in arena-like areas where Infested Chopper will stop and fight. Of these, all but the final battle atop the skyscraper are optional and the player gets no reward for depleting Infested Chopper's health during any of these earlier encounters.

It has the following attacks:

Infested Chopper rarely comes within range of melee attacks and largely has to be fought with firearms: due to its missiles being far more likely to hit Dante in the air than on the ground, the Shotgun is not a good choice and it is best to stick with Ebony & Ivory and wear it down, using Devil Trigger whenever possible. In New Game+ it is best to use the Missile Launcher to deplete Infested Chopper's health more quickly.

The pillars at the front of the boss area can be used as cover from its attacks: it is also possible to jump up on top of them, though this is only likely to get Dante knocked straight back down again. It is important to listen out for the sound cues of its chaingun and missile attacks, as Infested Chopper often attacks while off the top of the screen.

It is somewhat more difficult to deal with in the Bloody Palace due to the decreased space to fight it in, since its fuselage alone takes up about one-third of the boss room. 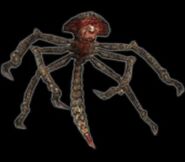 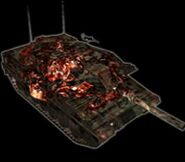 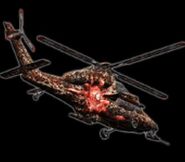 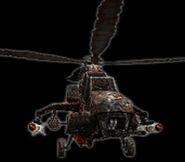 Retrieved from "https://devilmaycry.fandom.com/wiki/Infestant?oldid=116118"
Community content is available under CC-BY-SA unless otherwise noted.