Devil May Cry Wiki
Register
Don't have an account?
Sign In
Advertisement
in: Weapons, Guns, Devil May Cry 3,
and 10 more
English

In Devil May Cry 3, Lady lends the Kalina Ann to Dante after their fight in The Divine Library. She asks him to use this to "free" her father. Later, when Dante returns from the Demon World, he returns it to her.

In Devil May Cry 5, Lady loses her Kalina Ann after the fight with Urizen, however, Nico built the Kalina Ann II for her as a replacement and she paid for it, but this new weapon is eventually given to Dante.

Kalina Ann is named after Lady's mother, and has her name etched in the handle. It is a black rocket launcher with a long, serrated bayonet attached to it. The bayonet can be completely removed as necessary, as seen in the anime episode "Rolling Thunder", doing so however negates the weapon's grappling capabilities as the serrated blade doubles as a hook. Kalina Ann has chambers on the back end that hold mini missiles. The support handle has a second trigger for operating the grapple mechanism.

Kalina Ann can fire a variety of projectiles, including mini missiles, rockets, and homing rockets. It is capable targeting multiple enemies or multiple locations on one enemy. The banyonet can be launched and retracted via a wire and can be used as a grapple in combat or for traversal. In close quarters, the bayonet serves as a melee weapon.

It was designed and built by some other craftsman, but after they passed away I've been the one she comes to for tune-ups. Believe you me, she's real attached to this thing.

Whoever made this, I can tell they knew what they were doing, and then some. Sure wish I'd gotten the chance to meet 'em.

Kalina Ann has high damage and high area of effect due to the rocket explosion. It also has a long recoil and the rocket explodes a relatively short distance away. The recoil can be Shot Canceled with an Ebony & Ivory shot to dramatically reduce the time between shots. With Gunslinger, Kalina Ann can use Hysteric to fire mini-missiles to hit multiple enemies at once, however this comes with a long start-up animation, leaving Dante open for attack. Grapple allows Dante to use Kalina Ann to fire the bayonet to pull an enemy in (in the PS3/Xbox360 versions of the HD Collection, Grapple will not pull the enemy in).

Lady uses Kalina Ann to a much greater extent than Dante. The normal shot can be charged by up to 3 levels and can deal 2-3 whole bars of damage on a boss on Dante Must Die mode. Unlike her other guns, Lady must stand still to charge Kalina Ann. Lady is capable of using Hysteric for a much longer duration and with many more rockets. Another gun special allows Kalina Ann to target multiple enemies or multiple parts of one target that launches missiles flying all around the area before hitting the enemy or enemies. While they in the air Lady will be free perform any action.

Wire Shot is a technique that can be used on the ground or in the air: it fires the weapon's bayonet as a grappling hook. It can be used to manipulate an enemy's position from a distance in a similar manner to Nero's Devil Bringer grab move, but can only move enemies vertically. If an enemy struck by Wire Shot is on the ground they will be launched in the air, if the enemy is already airborne, they will be slammed into the ground.

As a melee weapon, Kalina Ann hits hard but moves slowly. It has one ground and one air combo. Bayonet Sweep is powerful 360 strike that will push any enemies within melee range back, creating distance and putting Lady back in in an advantageous position. Scatter is a defensive and evasive maneuver that pushes Lady back while dropping grenades and forcing the enemy back, creating the distance needed for Lady to be most effective.

Discovering the original Kalina Ann in this game is optional. It can be found on the left side of the boss fight arena in Mission 10, or on Mission 11 by taking a slight detour at the building area - after destroying all Blood Clots, there is one Red Orb Crystal in the area, to the right side of it is a passage that leads to a room containing the weapon in a pile of smashed furniture. Having both it and Kalina Ann II allows the equipping of Double Kalina Ann, which is treated as a distinct weapon with unique properties and moves. The original Kalina Ann can still be equipped as a single weapon, but gameplay-wise both versions are identical. 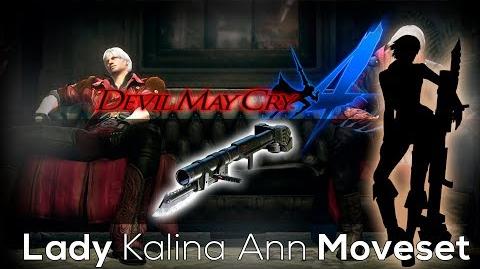 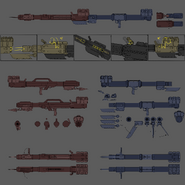