This article is about the Devil Arm. You may be looking for the boss for which it is named.

The King Cerberus is a tripartite nunchaku Devil Arm appearing in Devil May Cry 5 which originates from King Cerberus. It can stretch to incredible lengths, and is infused with the power of ice, fire and lightning[1], and can change its style with two additional modes: a fire bō staff and lightning chain forms. It is wielded by Dante during the course of the game.

King Cerberus has three possible shapes, depending on how it is used.

Nico's Weapon Report - King Cerberus
Dante used to have a Devil Arm called Cerberus way back when. If Dante went and turned that one in for an upgrade, this's what he'd end up with.

The so-called king of the Cerberus clan wasn't just whistling Dixie, let me tell ya. This arm changes shape, releasing fire, ice, even lightning as it tears through everything in its path.

As a craftsman, I'm pretty keen to figure out how you could cram all of those powers into this one slick weapon.

King Cerberus has the ability to transform from its original ice-element tripartite nunchaku, to a fire bō staff, and to a lightning-based three-section staff.

Ice Element boasts with the superiority in its use speed, which is practically instantaneous. Almost all of Ice Cerberus attacks are aimed to instant disability of a single enemy and quick beatings. What it lacks, though, is the short weapon reach. Player must get close to an enemy land a successful combo. Overall review

Lightning Element is mainly the crowd control weapon. This particular form has absolute dominance in terms of weapon reach and area coverage. Attacks could easily take down even flying enemies. However, lightning has to be charged, which must take a moment. And so, cannot be used as fast as every other form.

Fire Element is unique to the Swordmaster style and has a more universal moveset. Balanced range, quickness and damage per move are the possible advantages. Few disadvantages are found, which could only be very few aerial skills (one to be specific), which could be problematic in a fight with flying demons. 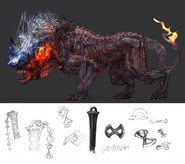 Retrieved from "https://devilmaycry.fandom.com/wiki/King_Cerberus_(Devil_Arm)?oldid=84518"
Community content is available under CC-BY-SA unless otherwise noted.