Devil May Cry Wiki
Register
Don't have an account?
Sign In
Advertisement
in: Weapons, Guns, Devil May Cry,
and 7 more

Edit
watch 02:19
Wiki Targeted (Games)
Do you like this video?
Play Sound

Devil May Cry
Devil May Cry 2
Devil May Cry: The Animated Series
Devil May Cry 4 (DF, SE)
Luce & Ombra (Ita: "Light & Shadow") are a pair of personally customized,[1] semi-automatic pistols made by the Dark Knight Sparda, designed for rapid fire.[2] They are now in possession of Trish.

The guns are primarily modeled after the Colt M1911 design, and are quite similar to the Ebony & Ivory, but with fewer customizations.

Library - Arms - Trish's Arms
LUCE&UMBRA
Guns named after light and darkness. These weapons are both quick and deadly.

Luce & Ombra are usually simply a reskin of Ebony & Ivory for the Legendary Dark Knight Costume, and in this form are mechanically identical to Dante's guns.

In Devil May Cry, Luce & Ombra are only available while playing as the Legendary Dark Knight. They function the same as Ebony & Ivory, and retain the ability to charge up with demonic energy and fire charged shots when in Devil Trigger.

In Devil May Cry 2, Twosome Time can be used Luce & Ombra to stop a nearby enemy from attacking. While Devil Triggered they will deal elemental damage corresponding to the currently equipped Amulet.

In Devil May Cry 4: Special Edition, Luce & Ombra are Trish's rapid fire firearms. They are particularly useful for decloaking enemies while in Devil Trigger. Luce and Ombra cannot be charged like most other firearms.

Trish uses Luce & Ombra as her long-ranged weapons in the Viewtiful Joe series.

Trish uses Luce and Ombra as her firearms in Marvel vs. Capcom 3: Fate of Two Worlds. 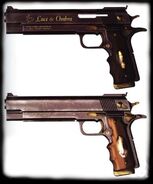 Concept art of the Luce & Ombra 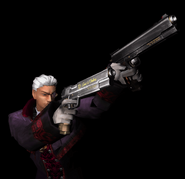 Sparda with his guns