Devil May Cry Wiki
Register
Don't have an account?
Sign In
Advertisement
in: Articles with stub sections, Characters, Playable characters,
and 7 more
English

Wings of the Guardian(DMC2)
Demon's Paradise(DMC2)
A Prayer For The Goddess (Lucia Battle 2)(DMC2)
“
I thought... I was a descendant of the clan that protects Vie de Marli... the ones who have the blood of the devils... But the truth is... I... was created by Arius... I could become a monster and attack the humans at anytime! Now, kill me... It's your job to hunt devils.
”
—Lucia to Dante, Devil May Cry 2

Lucia, also known as Χ (Chi), is a mannequin demon created by Arius. She later defected from him and became a member of the Protectors clan, adopted by Matier as her daughter and apprentice to be trained as a Devil Hunter. She later worked alongside Dante to defeat both Arius and Argosax.[3] She appears in Devil May Cry 2 as one of the main protagonists and a playable character.

Lucia takes her job as a guardian seriously, being frank and to the point when speaking. However, she possesses a soft and kinder side, as seen as she shows kindness and caring for Matier on multiple occasions, (despite later learning they're not related by blood) and Dante, who she placed her trust into with no objection of any sort.[3] Lucia is also very selfless, and upon finding out she was a demon created by Arius, she asks Dante to kill her to prevent her from going insane and killing innocent people, as Arius said she would. She is also shown openly worrying for Dante's safety when he claims he intends to enter the portal.[3] In the novel Devil May Cry 5: Before the Nightmare, it's revealed that Lucia has feelings for Dante after the two of them reunite in Vie de Marli and defeat the fire demon, Balrog.

She does possess a humorous side. Upon finding out that Dante's coin is actually a two-headed coin, she grins while giggling and fondly refers to him as "That macho ...".[3]

Tall and lithe, Lucia appears as an attractive woman with tan skin. She wears her bright red hair in a braid over her left shoulder. The most notable pieces of her wardrobe are her short, white cape and her exposed midriff. She also has deep emerald green eyes, which help accent both her tanned skin and bright red hair. She wears brown leather gloves that have white lining, and various brown leather gear on her outfit: the holsters for her blades, the pouches for her throwing knives, as well as a series of leather clasps to help keep her cape in place. Her red hair, white cape, and grey top/pants are meant to mirror the color scheme of Dante. Her Red hair to go with his red cloak and her white cape/grey clothing meant to go with his silver hair.

When in Lucia's Devil Trigger, equip the Aerial Heart and fly in the air, Press

constantly until you do not have control of Lucia. It can also be used when underwater during missions 6, 7, and 8. She will perform a powerful attack that causes magic orbs made of light to rain down onto targeted enemies. If you keep pressing it fast it will not waste Devil Trigger at all, but it will eventually stop.

Lucia lures Dante to her island so that Matier, her mother, may ask him to help them to defeat Arius, a sorcerer/millionaire who plots to merge with Argosax (a powerful demon) and take over the world. Matier asks Dante to help Lucia to find the remaining parts of the Arcanas, the four ancient, sacred relics used to seal Argosax away from this world and the artifacts which Arius is so desires for. Dante accepts, and he and Lucia start their quests separately.

Much later, Lucia meets Arius. Arius reveals that she is actually a mannequin, like the Secretaries, and was created by him. He says that she was a "defect" and so was about to be disposed of when Matier found her. He also tells her that a mark on her left shoulder - "X" (Chi) (pronounced "Kai") - is actually her real name. Then he demands that Lucia gives him the Arcanas that she have already found. After she angrily rejects, he says that "the world is already warped" and that "everything that belongs to the devils will eventually revert to its original form", including Lucia, and leaves her, uncertain about her own future.

Despite this, Lucia continues her mission to find all the remaining parts of the Arcanas. When she gathers them all, she gives Arcana to Dante, asking him to bring them to Matier for her. After that, she leaves to finish Arius by herself, but is unsuccessful and gets captured. Later Dante comes to rescue her, and gives out all the Arcanas despite Lucia's protests. After Arius and Dante fight, the sorcerer uses his hostage to pull them both out of the building. However, Dante transforms into a devil and they fly to safety. Lucia then asks him why he saved her to which he replies that "every hero has a weakness". There she also meets with Matier, who confirms that they are not tied by blood, but also says that their ties are bound by history and experience, which are much deeper then blood. Then after Lucia thanked her mother for the truth and love, she goes after Dante.

Lucia and Dante manage to enter the Uroboros Corporation's skyscraper building again, just to see that the sun has completely eclipsed and that the ritual cannot be stopped. After something in it goes wrong, it is revealed that Dante had switched the Medaglia coin with his own. Dante attacks the distracted Arius and defeats him. Watching this seemingly end, Lucia attacks Dante and asks him to kill her. She tells him about her doubts and then asks him to kill her again. Before Dante can decide anything, the door to the Demon World opens, even though the ritual was incomplete. Lucia says that she will go because she is "expendable", to which Dante suggests to leave it to fate. After heads fall once again, he takes a motorcycle and enters the Demon World. After Dante leaves, Arius, now completely turned into a vengeful undead monster, rises out of hellfire from the ruins of the building that had been the giant, Nefasturris, but Lucia puts this twisted abomination to rest. Shortly after, she is seen near the closed portal between the four separate Uroboros skyscrapers, waiting for Dante. Matier is also here, and comforts her, saying that she should not worry as "everything is just as it was with Sparda". Lucia then gets the coin Dante gave to her and reveals that both sides are heads.

Much later, Lucia is shown waiting in Dante's shop, flipping his coin continuously. She then hears a motorcycle outside the shop and goes out running. However, whether this is Dante or not is never revealed.

Several years later after Dante returns from Hell and the events of Devil May Cry 4 take place, it is revealed that Argosax's right-hand man Balrog has somehow made it to the Human Realm. Lucia, under the orders of Matier is sent to deal with the demon.

Trained by Matier, Lucia is quick and agile fighter that has proven to be a formidable opponent. A combatant who uses a combination of twin-bladed swords and hand-to-hand combat (notably kicks), she proved capable enough to slay Possessed Arius, who had the power of Argosax. Her agility allows her to move gracefully and execute wall runs and jumps.[3] Lucia is also a capable marksman, using ranged objects such as knives, darts, and a bow gun, to kill her targets.[3] Her throwing daggers are a little stronger than Dante's Ebony & Ivory, but her drawback is the speed of her projectiles making both weapons equal.

Demon Physiology: As a demon, Lucia has a body that is stronger, faster, and more resilient than most human bodies.

Marksmanship: Lucia is skilled with throwing objects such as knives and darts. She can throw multiple knives repeatedly while twirling in the air.

Unarmed Combat: While Lucia uses it in conjunction with swords, Lucia is skilled in kick-based combat, including sweeps, jump kicks, and flip kicks.

Acrobat: Lucia employs many flips and kicks mid-combat. immediately after landing from a high jump, she can go inter a handstand and spin herself around to kick enemies. 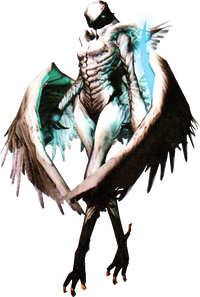 Originating as a defective Secretary demon, Lucia has various demonic powers in which surpasses that of the ordinary Secretaries used by Arius most likely due to her training from Matier.[3]

Lucia can take on her true, demon form via the Devil Trigger ability. This transformation gives her the appearance of an angelic, dove-like demon. In this form, Lucia is able to make use of Devil Hearts and use her feathers as projectiles. This form has a peculiar effect on her weapons, as it changes their color completely to match the elemental Devil Heart she is using.

Lucia is a character card in SNK vs. Capcom: Card Fighter DS.

Lucia appears as an unlockable icon in Playstation All-Stars Battle Royale. To unlock players must reach Rank 17 with Dante.

Lucia is featured in two cards, one is part of Rathalos' basic set while the other came with the Day of Nightmares card pack. A Legendary card of her named "Forlorn Protector Lucia" which spawns "Demon Form Lucia" and an Epic card that features her dubbed "Unwavering Blade" were later added in The Force Seekers expansion.

Lucia shares her name with Saint Lucy, a martyred saint, called Lucia in The Divine Comedy, where she appeared to help poet Dante Alighieri. Since Saint Lucy also happens to be the Patron Saint of The Blind, Lucia references this by having one of her eyes covered at all times.

Her Devil Trigger has been described as being more angelic than demonic, to the point of it being often called "Dove-Like", which is fitting as doves are considered the "Angels of Peace" in Catholic Mythology.