Devil May Cry Wiki
Register
Don't have an account?
Sign In
Advertisement
in: Devil May Cry, Locations
English

Mallet Island (マレット島, Maretto-tō?) also known as the Infernal Gate (冥界の門, Meikai no mon?)[1] is the island that Dante travels to in Devil May Cry, and is the focal point of Mundus' plan to open a portal between the human world and the demon world.

Mallet Island is dominated by an ancient castle, and is guarded by various demons. The castle has many floors and a subterranean area, and one room even houses an old biplane.

Early sketches of the castle show that there are various rooms and chambers such as Back Hall, Prison Chamber, and a guest room. In the building there are also portals leading to the pseudo-inverted Mirror Dimension.

Dante is lured to Mallet Island by Trish, who tells him of Mundus' plans to return to the Human World. Dante fights his way through the castle and its grounds as he searches for a way to enter the Underworld and confront Mundus. Dante first encounters Phantom in the cathedral, Griffon in the garden, Nelo Angelo at the entrance to the Mirror Dimension in the master bedroom, and Nightmare in the cathedral after he returns to the castle. The castle, along with the rest of the island, is completely destroyed following the defeat of Mundus, while Dante and Trish escape in an old biplane.

The fragments of the castle's history found in its various libraries state that it was established as a citadel at some point prior to the twelfth century. In the late twelfth century, it went through a period of wide-ranging and needless modifications by successive Castellans, which the staff found baffling. Bizarre happenings plagued the castle and its surrounding area, including crops growing out of season and time flowing unevenly in different parts of the castle, and the occupants frequently suffered terrifying nightmares. Later Castellans were known for imposing excessively high taxes and barbaric punishments.

The castle is derelict by the time of Dante's arrival, and appears to have been so for quite some time. It contains numerous rooms including a library and master bedroom, as well as a number of connecting hallways. Beneath it is a maze of sewers and waterways. The main hall is home to a statue of a knight holding a spear upright while riding a rearing horse, and a sinister statue of Mundus.

As is typical for a castle built before the fifteenth century, it has a barbican outside the footprint of the main castle. This structure is located close to the Coliseum: the outer gateway has collapsed, and it has become the resting place of the Devil Arm Ifrit.

When Dante returns after dark, demonic powers have warped the castle significantly. Many of the doors have simply disappeared, as has the statue of Mundus in the entrance hall. Through the use of the Staff of Hermes, Dante is able to explore previously unseen areas, including the Castellan's ostentatious throne room and the Bastille, a flooded area consisting of a cell block and a large square room of unclear function.

The defiled cathedral connected to the castle: according to the castle's records, one day the statue of a god disappeared from the altar and a strange power warped the cathedral's interior. It is the resting place of the Pride of Lion and the first place where Dante encounters Phantom. When Dante returns after dark, he finds a mysterious pool of liquid on the floor, which turns out to be a gateway to the Underworld.

This bridge extends from the cathedral out over the ocean to a suspended platform held aloft by unknown means. After Dante crosses it and reads an inscription telling him to go back, he is struck by lightning and the bridge split into segments. When he returns, the sections of the bridge, still split apart, hover eerily in mid-air, seemingly a result of the Underworld's influence.

Below the bridge lies an area of cursed ocean, surrounded by spectral barriers and infested with demons known as Sargasso. This cursed ocean is enough to drain even Dante's vitality.

When Dante returns to the castle after nightfall with the Staff of Hermes, the suspended platform serves as a gateway to other areas.

A large complex accessed by descending a spiral staircase across the castle's drawbridge. It incorporates the castle's outer wall and barbican, and adjoins the Coliseum. Here Dante obtains Ifrit and first encounters Griffon.

At the end of the Valley of Mist is an expansive greenhouse with a variety of ancillary structures. Dante must find and use the Sign of Chastity to obtain the Chalice to use on the Gold Knight statue, defeat Nelo Angelo for the second time and open the way to the next area: the Ghost Ship.

A mysterious pirate ship, run aground on the shores of a subterranean river and partially flooded. Dante eventually re-floats the ship, and sails it partway back to the Ancient Castle.

A large amphitheater where Dante has his final encounter with Griffon and first interaction with Mundus.

Dante later encounters a second area called "Coliseum" after stepping through one of the portals after nightfall: this one is just a square pit dug into the ground, and it is unclear if it is connected to the larger amphitheater. It connects directly to part of the castle which contains the Castellan's throne room. 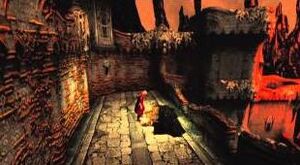 The Mirror Dimension serves as middle-ground between the Human World and the Underworld. It is a blurry, mirrored version of the real world accessed through reflections in the castle using the Elixir. There are two mirror locations Dante enters. One is through a mirror in the Castellan's chambers, from which Nelo Angelo first emerged, - this needs to be entered in order to recover the Philosopher's Stone. Other is accessed through a puddle of water in the Cathedral, from which Nightmare emerged, - portal to the Underworld lies behind the dome of the mirror Cathedral, and requires the Philosopher's Stone to be opened.

The Mirror Dimension is not just reversed in structure, but even in some physics — in the sky, Dante can see rays of light returning to a crimson sun. The landscape around the castle is even more drastically changed, consisting of strange rocky pillars resembling stalagmites. There appear to be screaming skulls in the castle walls. 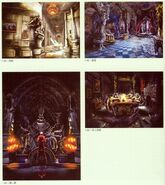 Mallet Island at a distance, as seen in the opening of DMC.