Malphas is the secondary antagonist of Devil May Cry 5. Nero has to defeat her in Mission 15: Diverging Point: Nero in order to rescue V.

Malphas is a large female demon. She has a large, bird-like body. This body has no feathers and has large, clawed arms with a baby bird looking head. On the top of the back, there is a humanoid body of three black eyed women melded together.

Malphas' humanoid body displayed proud and confident personality, boasting over her might as the demonic sorceress as shown throughout her fight against Nero. She is loyal to Urizen's cause and would do whatever it takes to ensure his reign. She also has cautious side as well as somewhat better judgement than her master, as she instructed Cavaliere Angelo to dispose Sword of Sparda despite Urizen's order to let it be, knowing that the weapon would be his downfall as long as Sparda's kin is still alive (which later confirmed through Dante who absorbed both the sword and Rebellion into a new Devil Arm which he used to defeat him). Her bird-like body on the other hand, behave much animal-like yet obedient to the former, as it assist the other in combat or moving around.

Malphas is first seen by V and Griffon, ordering Cavaliere Angelo atop his Elder Geryon Knight to find and destroy the Devil Sword Sparda, fearing that a descendant of Sparda may attempt to wield the blade against the demon king Urizen and end his reign, before taking her leave through a portal.

Deep in the inner levels of the Qliphoth, Malphas ambushes a weakened V and steals his three demon familiars before trapping them both in a pocket dimension, forcing V to face phantasms of Cavaliere Angelo, Artemis, and Goliath to reclaim his familiars and free himself from her trap. Malphas waits in her lair within the Qliphoth for Urizen to devour the tree's fruit and ascend to his full power when she senses V's presence and threateningly approaches the weakened human, only to be shot by the arriving Nero.

Outraged at Nero's interference and mocking him for having lost his demonic power, Malphas engages the descendant of Sparda in battle, using her sorceress powers and the demonic bird fused to her body to attack. She is defeated and wonders how could Nero be so powerful before she gets killed by Nero.

Nico Enemy Report - Malphas
According to V, this demon calls itself Malphas.

Judging by the different body tissue of its upper and lower halves, I think it used to be two separate entities.

My guess is some arcane sorceress type fused the bird into herself, but then realized she couldn't keep the bird under control.

By the way, this bird was still a lil' chick. If you'd let it grow up all big an' strong, we coulda had a real problem on our hands.

Malphas is an incredibly powerful demon, not only physically thanks to the massive demonic bird chick they are fused with but also due their skills in manipulating demonic power through sorcery, which they primarily use through conjuring of portals for teleportation. Malphas is also capable of creating small pocket dimensions to trap her prey in, wherein they will conjure a 'metaphysical infernal phantasm' of previously slain demons for them to battle with. While these phantasms are powerful and not to be underestimated, they do not wield the full strength of their bases and as such are substantially weaker.

When forced to do battle directly, Malphas allows the demonic bird to do their dirty work, with the chick primarily using charging headbutts, heavy body slams and strong kicks and pecks from its clawed feet and beaked mouth. If their foe tries to fight from a long distance, Malphas combines these physical attacks with her portal conjuring, allowing the chick to attack from long range without even having to move. When sufficiently damaged or enraged, Malphas will empower the demonic bird, coating in an black ichor that increases its strength, while also causing the demon to run wild with abandon, inflicting massive damage on those unluckily in its path.

If Malphas finds themselves badly injured, they will use their sorcery to begin healing themselves, though this requires them to stay in one place, remaining defenseless and vulnerable to attack.

Malphas first appeared in TEPPEN with its "The Devils Awaken" expansion. She is featured in one unit card and one action card.

Malphas is named after the Goetic demon. Demonological sources describe him as a mighty Great Prince of Hell, with forty legions of demons under his command and as second in command under Satan. Malphas is said to build houses, high towers and strongholds, throw down the buildings of the enemies, destroy the enemies' desires or thoughts (and/or make them known to the conjurer) and all what they have done, give good familiars, and quickly bring artificers together from all places of the world. According to the writers, Malphas accepts willingly and kindly any sacrifice offered to him, but then he will deceive the conjurer. 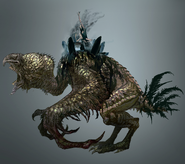 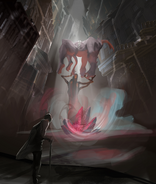 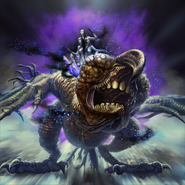 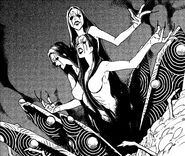 Malphas in Visions of V