Marvel vs. Capcom 3: Fate of Two Worlds is the third installment in the series of crossover fighting games created by Capcom, in which characters created by Marvel Comics appear alongside Capcom's own characters. It features Dante and Trish as playable characters. The game's expansion, Ultimate Marvel vs. Capcom 3, released in November 2011, also added Vergil as a playable character. Both versions run on MT Framework, the same engine used for Devil May Cry 4. 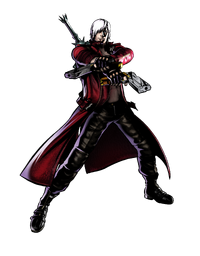 Dante is now a playable character in the series, wielding Rebellion, Kalina Ann, Ebony & Ivory, Cerberus, Nevan, Beowulf, Coyote-A, Artemis, and Agni & Rudra. The character design for Dante is based on his Devil May Cry 3 appearance, with the "Hyper Mode" in the form of his Rebellion Devil Trigger. Dante's voice actors are Reuben Langdon and Toshiyuki Morikawa, reprising their roles in English and Japanese, respectively. Dante's theme song is a remix of Devils Never Cry from the Devil May Cry 3 Original Soundtrack.

Dante's rival in the game is Deadpool, a Canadian mercenary with whom Dante shares similarities. Both Dante and Deadpool master an arsenal of guns and swords, possess superhuman abilities, and use a lot of trash talk in battle. They can be seen in the Episode 1 trailer fighting in a bar named after them, until another character, Morrigan Aensland of the Darkstalkers fighting game series, pricks Deadpool in his rear end, thus ending the fight.

Dante's talkative personality also makes the transition. Many of his audible battle quotes show that he doesn't take fights too seriously. His special conversations retain his flippant personality as well. In the tie-in 12-page comic packaged with the game's special edition, Deadpool and Dante trade sarcastic remarks as they fight one another (Deadpool: Where you from, pretty boy? The planet of the Fabios? Dante: Jealousy will get you nowhere.). Dante later remarks on Galactus' appearance, stating that he would only be short of a cape and a cane to being "the biggest pimp I've ever seen".

Dante's theme in MVC3 can be found through this link: 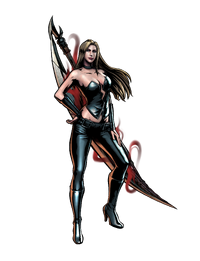 Trish is seen coming on the aid of Captain America and Chun-Li during the attack on the S.H.I.E.L.D. Helicarrier by Doctor Doom and Super Skrull. Trish appears to be flirtatious with every line of hers being an innuendo of sorts. Her ground throw (either side) has her mount on top of her opponent. Her winning animation has the camera zoomed close to her cleavage as she pulls her signature shades from her top.

One of Trish's alternate color schemes is based on Gloria, with a white shirt color, even the skin tone. The other is based on Dante's color scheme on DMC. Trish's English voice actor is Danielle Burgio, her Devil May Cry 4 English voice and mo-cap actress. Her Japanese voice actor is Atsuko Tanaka, who reprises her role from the anime. Her battle theme is a vocal remix of the DMC1 second battle theme Lock and Load, remixed with female vocals.

During her flight mode, she gains a glowing gold aura around herself similar to the one she had in Devil Trigger in Devil May Cry 2 though there is no dramatic increase in power.

Trish's battle theme is through this link: 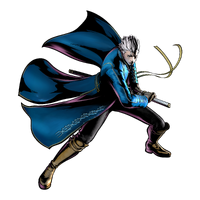 Vergil was added to the game's expansion, Ultimate Marvel vs Capcom 3. Prior to his inclusion, Albert Wesker had Vergil's color scheme as one of his alternate costumes. In the expansion, both Dante and Trish also have his color scheme.

Vergil's voice actors are Daniel Southworth in English and Hiroaki Hirata in Japanese. His theme is a remix of Vergil Battle 2, from DMC3.

Vergil's battle theme can be heard through this link:

Lady only makes a brief cameo in her Devil May Cry 3 design as an ability card during Heroes vs Heralds mode.

The game features a wide variety of unique dialogue between certain pairs of characters in pre- and post-fight lines and when tagging out.