Flo DiRe
“
We are the guardians of this land, Vie de Marli. Our clan fought the demons with Sparda.
”
—Matier, Devil May Cry 2

Matier is a member of the ancient Protectors clan who once fought alongside Sparda. In recent times, she called upon Dante in order to help stop Arius from gathering the Arcana and releasing the seal on Argosax.[1] She is a major character appearing in Devil May Cry 2.

Matier is a short, frail old woman, with tan skin and deep, green eyes. She wears a white colored knit cap on her head with bronze bells on each side, a dark green robe with white patterns encircling the wrists and base, and brown, open toed sandals.

Numerous bracelets are worn on her wrists, and a red, beaded sash is wrapped over her right shoulder. She is often seen carrying the Arcana Bastone, and relinquishes it near the end of the game to Lucia.

Matier is a well-mannered woman who, despite the numerous struggles occurring throughout the events of the game, retains a cheerful and optimistic disposition, and has the utmost faith in Lucia and Dante, remaining certain they will emerge victorious against Argosax.

Despite not being her biological mother, Matier reassures Lucia that their lack of blood relation is irrelevant, and that they are "bound by history and experience, which runs much deeper than blood", and doesn't think any less of Lucia for being adopted.

Many years before the events of Devil May Cry 2, a younger Matier fought alongside her fellow members of the Vie de Marli clan in a bloody conflict against Argosax the Chaos, who was brought forth by a secretive tribe hidden amongst the population of Dumary Island. In their darkest hour, they received the aid of the Legendary Dark Knight, Sparda, who joined forces with the clan to put an end to the Demon King.

Using the Four Arcana Relics, they were able to turn the tides of battle, and succeeded in resealing Argosax through a portal to the Demon World, with Sparda pursuing him to ensure his defeat. Despite becoming trapped in the Demon World, Sparda was eventually able to return to the Human World, and Matier met with him at least one last time to recount the event.

Sometime before the events of the game, Matier came across Lucia, an artificial demon created by Arius who was to be disposed of for an unknown defect. Taking pity upon her, Matier took Lucia in, and raised her in the ways of the Vie de Marli clan as her adopted daughter.

In the present day, Matier has Lucia convince Dante to come to Dumary Island, as she seeks to enlist the Son of Sparda's help in order to stop Arius, a power hungry corporate executive who wishes to become king of the Human World, and plans to release Argosax in order to utilize his power by transforming the island into a haven of demons, where he will then shape his own dark army and rule humanity with an iron fist. To ensure that Argosax is sealed again, they must recover the four Arcana relics, and put a stop to Arius' machinations.

Following Lucia's failed assault on Arius' headquarters, Matier comforts a saddened Lucia, who asks to be told the truth of her origins. Matier then reveals the Lucia is not her biological daughter, and that she was indeed adopted after being disposed of by Arius. She then tells Lucia that it is not their blood that unites them, but their history and experience, and proudly tells Lucia that she is her daughter, adopted or not.

After Dante succeeds in resealing Argosax and becomes trapped in the Demon World, Matier once more comes to Lucia to comfort her, telling her that just like his father before him, Dante will indeed return, and that she should have faith in him.

Devil May Cry 5: Before the NightmareEdit

Matier was first added to TEPPEN via its "The Force Seekers" expansion. She is featured in one purple unit card. 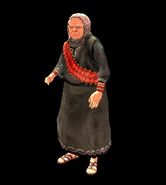 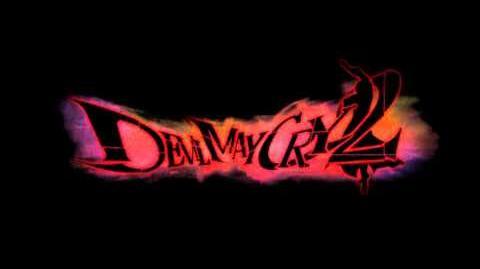 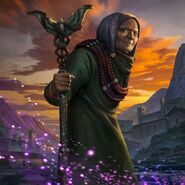 Matier in Puzzles & Dragons
Add a photo to this gallery

Considering her unusually long life and her being a member of Vie de Marli's guardian clan, she may have demonic heritage.

Retrieved from "https://devilmaycry.fandom.com/wiki/Matier?oldid=110442"
Community content is available under CC-BY-SA unless otherwise noted.